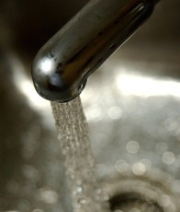 Water is used to wash away many things, but could it be also used to kill harmful viruses, fungi and bacteria in wounds? Well, the developers of a form of “super-oxidized” water that speeds up wound healing most definitely think so.

Occulus, a Californian firm developed this “self-oxidized” water known as Microcyn by filtering it through a salt membrane.

When used with an antibiotic to treat wounds of patients with diabetes, the liquid successfully worked in 43 days on an average in comparison to 55 days for patients given the standard treatment of iodine plus an antibiotic.

Apparently, the water’s effect is the result of ‘oxychlorine ions’ which work by rapidly piercing the walls of free-living microbes and killing them. Human cells are not harmed as they are tightly bound together in a matrix.

Microcyn could possible benefit diabetics who develop foot ulcers whose wounds take very long to heal and would eventually have to undergo an amputation.

Microcyn was officially approved for use in cleaning two years ago in the US and official phase two trials to test its potential are currently underway in the U.S. and Europe.