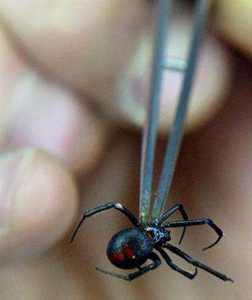 Scientists have discovered a potentially marketable contraceptive in the venom of Chile’s black widow spider. The bit of this spider is fatal to many but can also cause prolonged, painful and involuntary erections in men.

The venom of the black widow spider also known as Latrodectus mactans, apparently has spermicidal properties not found in black widows in other regions of the world, Chilean Dr.Fernando Romero said.

Romera heads a research team that has studied the spider’s venom for seven years. In fact this study has been prompted by tales of Chilean farmers who acquired superhuman virility after being bitten by the black widow.

Initial studies focused on taking extracts from the venom to treat erectile dysfunction, but they soon discovered it had a molecule that also made it an effective contraceptive.

Romero said he believed the molecule’s natural properties are superior to those of synthetic spermicides currently on the market.

“For us in Chile, this has opened a window of opportunity to an incredible market, since currently there are no naturally based spermicides that have the properties of this discovered molecule,” Romero said.

Romero, based at the Universidad de la Frontera in the southern city of Temuco, has already applied for a patent for his erectile dysfunction medicine.

His team discovered the property after looking into Chilean folklore that describes a virile man, one known to have spectacular sexual energy or many sexual partners, as being “spider-bitten.”

The spider’s bite can kill children and the elderly, but among strong young farmers it leads to erections that can last for days and involve involuntary ejaculations. At the end of the ordeal, the man is left sexually energized and feels physically stronger, the saying goes.

Romero said he was confident his research would be complete in a couple of years and the spermicide would become available to world markets.

“We have to make sure there are no side effects … so that it can be used as a gel in combination with condoms, or as suppositories for women.”

The research is being supported by Chilean pharmaceuticals company Andromaco.