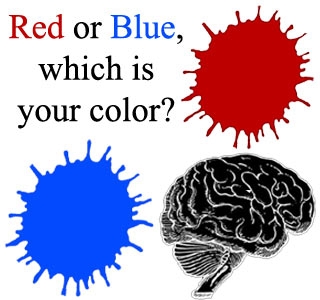 A new study says that an individual’s brain performance for different tasks relies on different colors. This study states that red color is for attention to detail, while blue color enhances one’s creative ability. This study was conducted by the University of British Columbia.

The study author’s aim was to finally resolve the issue between advertisers, marketers and psychologists regarding which color, red or blue boosts the brain more. For this purpose the study investigators evaluated the cognitive performance of more than 600 participants on six tests which stimulated either their detail-orientation skills or creativity skills. Most of the tests were said to be conducted on computer screens that were red, blue or white.

Study author, Juliet Zhu, Sauder School of Business, University of British Columbia, says that, “Previous research linked blue and red to enhanced cognitive performance, but disagreed on which provides the greatest boost. It really depends on the nature of the task.”

The test results revealed that red enhanced the participants’ performance on the detail-oriented tasks; while blue brought out twice the creativity ability of the subjects. Zhu explains, “Thanks to stop signs, emergency vehicles and teachers’ red pens, we associate red with danger, mistakes and caution. The avoidance motivation, or heightened state, that red activates makes us vigilant and thus helps us perform tasks where careful attention is required to produce a right or wrong answer.”

Regarding blue color, Zhu continues that, similarly people associate blue color with the sky or ocean, with a feeling of openness and tranquility. Ravi Mehta, PhD candidate at the University of British Columbia says that this could be the reason why people fearlessly venture into their creativity and get explorative. Hence blue color happens to be the favorite color of most people.

The study authors say that this knowledge could be taken advantage of by the advertisers and marketers, in grasping people’s attention by labeling their products in red; while promoting tranquility through blue.

Their findings are published in the Science Express issue.