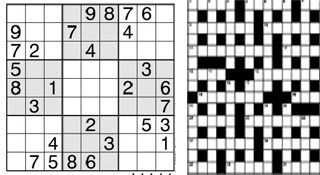 Have you noticed that when you sit down and try to crack a few puzzles or brain twisters, you feel a lot more aware afterwards? Now, a new study has suggested that solving crosswords and similar puzzles could help to boost brain power and improve one’s concentration.

Solving such puzzles could also help those who have increased risks of developing memory disorders later on in life, said Jennifer Mozolic, a student at Wake Forest University Baptist Medical Center in North Carolina, who studied 23 people aged 65-75.

It was found that eight attention-training sessions improved the ability of people to block out distractions and concentrate.

The sessions involved either a group brain exercise programme or a structured one-on-one mental workout.

Functional magnetic resonance imaging (fMRI) was used to analyze the blood flow and activity in the participants’ brains while they completed tasks.

According to Mozolic, the study is yet ongoing and these are just preliminary findings.

“This suggests that attention training is a potential way to improve sensory processing by reducing older adults’ susceptibility to distracting stimuli,” Mozolic said.