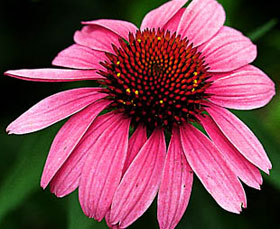 A new research has shown that ‘Echinacea’, a herbal remedy used by North American native Indians to ward off infections, reduces the chances of catching a cold by more than half.

It was also found that Echinacea reduces the duration of colds by an average of 1.4 days.

US scientists made these discoveries after they put together evidence of the anti-cold properties of Echinacea from 14 different studies.

However, they did stress that the possible risks of taking the remedy needed to be investigated further before it could actually be recommended to patients.

The reported side-effects, in spite of being rare, include stomach upsets, nausea and dizziness.

Professor Ronal Eccles, an expert at the Common Cold Centre at Cardiff University, called these findings ‘a significant step in our battle against the common cold.’

Scientists are still not clear as to how the Echinacea plant’s biological effects work. This plant was considered a potent medicine by Indians and became popular as a herbal remedy in Europe and the US in the 1930s.

‘Harnessing the power of our own immune system to fight common infections with herbal medicines such as Echinacea is given more validity with this interesting scientific evaluation of past clinical trials,’ Eccles added.