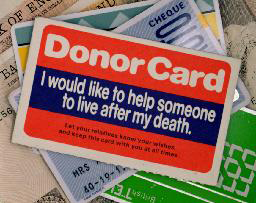 This Tuesday, Britain’s Chief Medical Officer proposed that all Britons should consider donating their organs after death unless they have opted out.

Sir Liam Donaldson, Britain’s Chief Medical Officer is concerned over the lack of available organs for transplant. He believes that this country needs a system which assumes consent.

Under current laws, organs may be removed from a body only if the person has made his consent known or, if he has not specified his wishes, with the consent of a family member or representative.

Donaldson also argued that the law tends to discourage organ donation. The British Medical Association has backed Donaldson’s proposal. However, the Association has warned that the public would need to be made completely aware of the change.

One way to help meet the demand for organs would be an opt-out system. However, if this system were to be introduced it must also be ensured that those opting in or out did so with informed consent, said Dr. Keith Rigg, the vice president of the British Transplantation Society.

Donaldson maintained that opting out of the system would be clear and easy, and that safeguards would protect vulnerable individuals like children and the disabled from exploitation.

He also said that the experience of other countries showed that such a system could command public confidence.

As of now, Spain, Belgium, Austria and the Czech Republic have similar arrangements. In some of these countries the rate of donation is nearly double Britain’s.