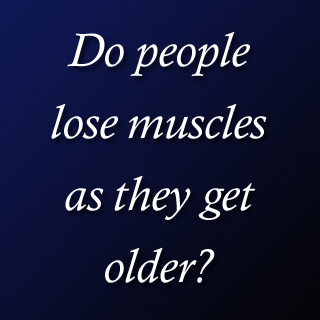 Why do people’s arms and legs supposedly get thinner as they age? According to a team of researchers from Nottingham University (N-U) Schools of Graduate Entry Medicine and Biomedical Sciences, it could possibly be due to the body’s inability to deliver nutrients and hormones to muscle because of poorer blood supply.

Researchers have already shown that at the time of eating, older people apparently cannot make muscle as quick as the young. In addition, they’ve found that the repression of muscle breakdown appears to get blunted with age.

Furthermore, the team claimed that a ‘double whammy’ seems to affect people above 65 years. However they were of the opinion that weight training may perhaps ‘rejuvenate’ muscle blood flow and assist in retaining muscle for older people.

For the purpose of better understanding this criterion, Michael Rennie, Professor of Clinical Physiology, and Dr Emilie Wilkes, along with their colleagues compared a group of people who were in their late 60s to one group of 25 year olds with equal numbers of men and women.

They were noted to examine their subjects first before breakfast and then after they had provided them with a small amount of insulin. Apparently, the insulin was given in order to raise the hormone to what it would be if they had eaten breakfast containing a bowl of cornflakes or a croissant.

Professor Rennie said that, “We tagged one of the amino acids (from which proteins are made) so that we could discover how much protein in leg muscle was being broken down. We then compared how much amino acid was delivered to the leg and how much was leaving it, by analyzing blood in the two situations.”

The findings of the research elucidated that the continuous loss of muscle in older people seems to occur as when they eat they are unable to build enough muscle with the protein in food. Supposedly, the insulin also fails to shut down the muscle breakdown which rises between meals and overnight. Insulin is known to be a hormone released during a meal. Usually, insulin in young people may act in order to slow muscle breakdown.

“The results were clear. The younger people’s muscles were able to use insulin we gave to stop the muscle breakdown, which had increased during the night. The muscles in the older people could not,” Professor Rennie continues.

He further explained that, “In the course of our tests, we also noticed that the blood flow in the leg was greater in the younger people than the older ones. This set us thinking: maybe the rate of supply of nutrients and hormones is lower in the older people? This could explain the wasting we see.”

Professor Rennie claimed that his team seems to be making good headway in discovering additional facts about what causes the loss of muscle with age. It appears like as if they have good clues about how to lessen it with weight training and perhaps other ways in order to increase blood flow.

The findings of the research have been published in The American Journal of Clinical Nutrition.