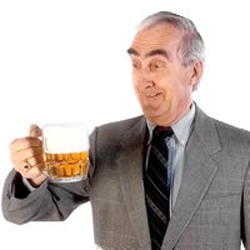 An expert has said that age-based drinking guidelines should soon be introduced in an effort to protect consumers’ health.

According to Mary Gilhooly, professor of gerontology at Brunel University, the recommended maximum intakes should factor in age as well as gender.

She also warned that baby boomers were more likely to over drink alcohol in old age, when compared with previous generations because they have always done so.

Previous research has shown that overdrinking in old age could create problems as age affects the body’s ability to metabolize alcohol. Older people have higher blood alcohol levels after drinking the same amount as younger consumers.

In many cases the elderly should be advised not to drink at all, according to Prof Gilhooly who is director of the Brunel Institute of Ageing Studies.

She said: “Middle-aged and older people need to be aware of the impact of ageing on alcohol metabolism. They need to reduce alcohol consumption levels with age.”

She said recommended drinking levels were currently set too high for many older people. And that could become more acute if baby boomers did not cut their alcohol consumption in old age.

Prof Gilhooly said further research was needed into what the new alcohol consumption guidelines for older people should be. Her comments follow a report on alcohol and ageing last year.