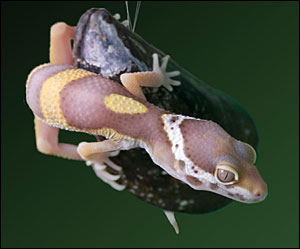 Researchers at Northwestern University have managed to combine the suction power of gecko feet with the stickiness of mussels to create a material that will attach to almost anything, whether wet or dry, with an incredible sense of adhesiveness.

Geckos are known for their remarkable ability to scurry up vertical surfaces and are even able to move along upside down. However, it was noted that when a gecko was put underwater, its ability to stick was dramatically reduced.

It’s a known fact that water is an enemy of adhesives. But, now this newly developed material called “geckel”, functions likes it’s meant too, both underwater and on dry surfaces.

According to Phillip B. Messersmith, professor of biomedical engineering at Northwestern’s McCormick School of Engineering and Applied Science and an author of the paper,“The geckel material should be useful for reversible attachment to a variety of surfaces in any environment.”

The findings could lead to application of geckel in not only medical but also industrial, consumer and military settings.

“I envision that adhesive tapes made out of geckel could be used to replace sutures for wound closure and may also be useful as a water-resistant adhesive for bandages and drug-delivery patches. Such a bandage would remain firmly attached to the skin during bathing but would permit easy removal upon healing,” he added.

“We have demonstrated a proof of concept, but it will be necessary to develop a patterning approach that works on a large scale,” said Messersmith, who believes they can produce a material with even better adhesion. “The challenge will be to scale up the technology and still have the geckel material exhibit adhesive behavior.”