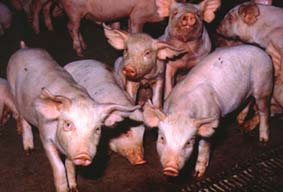 A pig disease in Vietnam has caused around 42 people to become sick and has also killed two. The government is now calling for speedier investigations and urgent measures to control the bacteria, the nation’s said.

“Since the disease involving Streptococcus suis bacteria is directly related to human health and the development of the husbandry sector so we need to act urgently, without any delay,” Phat was quoted as saying.

The bacteria came to light recently in the country of 85 million people after 22 people in the Northern provinces became infected, followed by 20 in the southern region.

He urged officials to check if there were any links between the Porcine Reproductive and Respiratory Syndrome (PRRS) virus, also known as Lelystad virus that has infected more than 27,000 pigs in the central region, and the Streptococcus suis bacteria.

People can be infected after coming into direct contact either by hand or eating pork from a sick pig, Nguyen Hong Ha deputy head of the National Institute for Infectious and Tropical Diseases, said in a Voice of Vietnam radio broadcast.

The bacteria cause rapid internal hemorrhage and high fever and can develop meningitis, septicaemia and endocarditis in the next stage leading to death or deafness if the victim survives.

On Monday, Minister Phat said the PRRS, also known as “blue ear disease,” had been spreading fast in the central provinces of Quang Nam, Quang Ngai and Danang city partly because officials were unable to stop trading and transport of pigs.