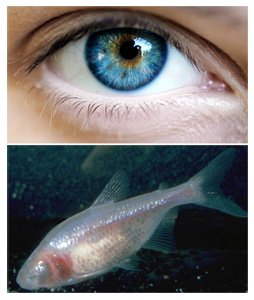 Scientists have been able to successfully restore the vision of blind cavefish who live in dark pools. This research surely brings a lot of hope for the millions of remain visually impaired all over the world.

Researchers in the United States conducted a study which found that mutations in different genes are responsible for eye loss in separate cavefish lineages. By altering the genetic function, vision could be restored in their offspring.

Lead research of the study Richard Borowsky of New York University said that the findings could help to understand better the way human eyes function.

“These genes that have their function altered by mutation are the same genes that normally play important roles in the development and maintenance of the eye in humans as well as in fishes,” said Borowsky.

For the study, the researchers examined four populations of blind cavefisj Astyanax mexicanus, which live in different caves in northeast Mexico. Blind for millennia, these fish evolved from eyed, surface fish. The genetic analysis showed that the evolutionary impairment of eye development, as well as the loss of pigmentation and other cave-related changes, resulted from mutations at multiple gene sites.

In order to gauge how genetic make-up could bring about the restoration of vision, the researchers created hybrids of the different cavefish populations. Among these various hybrids, they found that nearly 40% in some hybrid crosses could see.