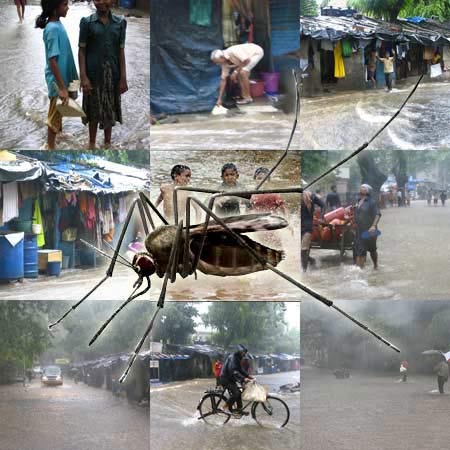 The monsoons are a time of change: change of season, change in harvest and change in the stages of life cycles of various plants and animals. This leads to a spike in the incidence of various diseases. More than 10 deaths have been reported in Mumbai so far, related to malaria, leptospirosis, diarrhea and gastro-intestinal diseases such as typhoid, cholera, diarrhea and dysentery.

Leptospirosis spreads through water contaminated with the urine of various animals like cats, rodents, and dogs. These animals act as vectors or carriers for the spiral bacteria that are the causative agent. A single bacterial cell is enough to cause clinical manifestations of the disease. Mortality and morbidity is high. Hence, quick diagnosis is of critical importance.

Various gastro-intestinal problems are caused by bacteria and amoeba spreading through contaminated food and water. So, utmost caution must be practiced. It is advisable to avoid eating outside food and in general, avoid uncooked food and water that is not boiled or filtered.

But perhaps the disease that has earned most notoriety is malaria. Malaria is caused by the parasite Plasmodium through a vector in the form of female Anopheles mosquito. The oft repeated preceding statement is now common knowledge. But what do you as a lay person understand from it? The causative agent of Malaria is a parasite or worm, Plasmodium and the Mosquito is only the carrier. It is not contagious but has high morbidity and mortality. It infects the red blood cells and can potentially invade any organ of the body if unchecked. Malaria is diagnosed by a peripheral blood smear, i.e. microscopic observation of a film of the patient’s blood on a glass slide.

What Can I Do?

In all probability you will not be able to decipher the particular species of the mosquito, let alone its gender. Initial symptoms include fever, headache, nausea, convulsions which are pretty much common for a host of diseases and conditions. So the best thing to do in times of higher risk or in case you live near a creek or dump is to consult your doctor as soon as possible.

Many Government ads through various media urge people to check the spread of malaria by making sure stagnant water is not allowed to stand for long periods of time. This can be in the form of discarded tires or your neighborhood pothole that has become so big, it serves as a landmark.

This is because mosquitoes breed in stagnant water where their larvae mature. If we cut out this link, there will be fewer mosquitoes and hence fewer risks of infection. Again, in all probability, you can’t be sure if the larvae you’ve destroyed by upturning an old garbage can are the same ones that would have potentially infected you!

Hence, while performing your duties as a Good Samaritan, be sure to use mosquito nets and insect repellants as these are the best and most simple ways of prevention.

Time –tested clichés may not look better than the latest fad but prevention is still better than cure.

In Africa where deaths from malaria are the highest in the world, specially infant and child mortality, people cannot afford mosquito nets which cost less than 1$. Diseases such as malaria, though tropical, are spreading both sides of the equator due to warming of the earth’s atmosphere. This may also lead to more virulent manifestations of the disease in the tropics.