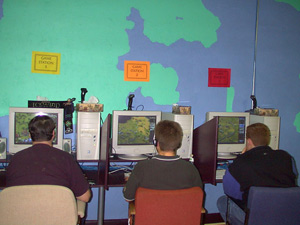 Online video games may have some social perks, a new study shows. The study, published in the July edition of the Journal of Computer-Mediated Communication, focuses on large, collaborative games called MMOs (massively multiplayer online games), and found that, contrary to common perception, players are socializing, and not shunning people.

Players may spend hours absorbed in those games. But that doesn’t necessarily mean they’re antisocial, writes Constance Steinkuehler, PhD, and Dmitri Williams, PhD. Steinkuehler is an assistant professor of educational communication and technology at the University of Wisconsin at Madison. Williams is an assistant professor of speech communication at the University of Illinois at Urbana-Champaign (UIUC).

“Spending time in these social games helps people meet others not like them, even if it doesn’t always lead to strong friendships,” Williams says in a UIUC news release.

The researchers reached that conclusion after studying new MMO players for a year and interviewing players of the games “Asheron’s Call I and II” and “Lineage I and II.” The games served as a fun, neutral place where people got to know each other, at least a little bit — sort of like a coffee shop or a pub, the researchers note.

One player wrote, “I don’t have to worry about how I look or if my hair or clothes are okay” when playing MMOs.
Another told fellow players about catching a cold after his girlfriend’s cousin kissed him. That story prompted a string of questions about the kiss. “She kisses me on the cheek,” the player replied.

Williams and Steinkuehler noticed a lot of “bridge” conversations — chats between players who don’t have a lot in common, except their game. “Bridging” is mainly seen among new players, while longtime players tend to be more intense and less chatty during games, the researchers note. Bridging can be broadening, but even so, MMOs can’t replace real-life relationships.

“For the individual seeking emotional and substantive support, they are far less socially useful — at least in the short term,” the researchers write.