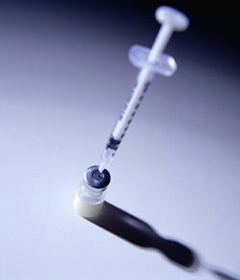 A month after researchers pin pointed two proteins linked to youth, an injection to erase the health problems associated with ageing is near at hand.

The injection manipulates a body’s mitochondria, sausage-shaped ‘powerhouses’ in every cell of the body except red blood cells. They turn the food we eat into energy that can be used by the heart, muscles, brain and other parts of the body. Research has suggested their deterioration is an important cause of ageing, according to a report in New Scientist magazine.

Correcting genetic mutations in mitochondria can also help fight illnesses such as diabetes, Parkinson’s, stroke, Alzheimer’s, heart disease and cancer. The gradual build-up of the faulty genes over a lifetime is also thought to be an important cause of ageing. But attempts to introduce normal genes into mitochondria to replace defective ones have so far failed.

“It is not a panacea but, if successful, it might potentially correct part of this age-associated damage to mitochondria which might be important in slowing down ageing,” Professor Patrick Chinnery, a leading British expert on mitochondrial disorders, said.

Mitochondria have their own DNA. If this is faulty a mitochondrial disease occurs.

So far, researchers have been unable to transport genes across the mitochondrial membrane into the mitochondria themselves. In their research, Marisol Corral-Debrinski and colleagues at the Pierre and Marie Curie University in Paris selected two mitochondrial gene mutations – one that causes muscle weakness and another that causes blindness. They tagged normal versions of these genes with two separate ‘address codes’ and inserted them into cells grown in a lab. Both mutations were reversed.

The experiments would now be conducted on rats, and eventually humans may get the ‘elixir of life’.

In a recent trial reported in the Lancet, injections of genes into the brain significantly helped relieve the symptoms of Parkinson’s disease.

About one in 5,000 children and adults are at risk of developing a mitochondrial disease, which include disorders of the nervous system and blindness.