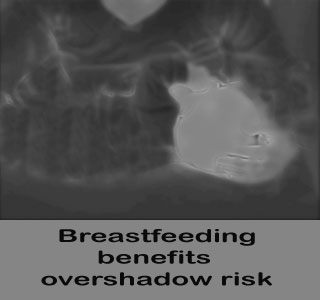 A latest study was conducted on the comparison of breast fed and formula fed infants. The study revealed that, evidently, the benefits of breastfeeding outweigh the possible exposure of the infant to environmental chemicals like dioxins that may be present in breast milk.

This study was called “The Heart of the Matter on Breast Milk and Environmental Chemicals: Essential Points for Health Care Providers and New parents.” The study is believed to have covered the entire history of medical literature, and also included the time period when, evidently, the amount of environmental chemicals was believed to be higher than the present time.

Ruth A. Lawrence, M.D., Editor-in-Chief of the Breastfeeding Medicine, from the Department of Pediatrics, University of Rochester School of Medicine and Dentistry, says that, “When breast milk was chosen by regulatory agencies as a handy medium for measuring environmental toxins, the public became alarmed that breast milk was contaminated. The authors, eminent authorities on the subject have put these fears to rest.”

The results of this study are based on the accumulated epidemiological data. The study does not cover-up the adverse effects caused by possible exposure to environmental toxins like dioxins. However, evidently, as compared to population effects, the authors characterize between the statistical significance of risk/benefit assessments in an individual.