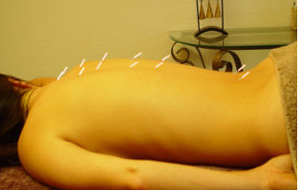 German investigators have found that Acupuncture, a traditional Chinese medical technique using needles is better in healing back pain than drugs and exercise.

A study conducted by the investigators looked at 1,162 adults with an average age of 50 who suffered from chronic lower back pain for several years. The participants were randomly split into three groups.

The research team found that 48 percent of those in the group who received the acupuncture reported at least one-third less pain and an improvement in functional ability with lasting benefits.

Not only verum acupuncture, even people who underwent sham acupuncture, where needles are inserted randomly and less deeply around the painful area while avoiding the medians, got relief.

Forty-four percent of the people who underwent sham acupuncture reported relief from their back pain, which outnumbered the patients given conventional therapy and only slightly fewer than traditional acupuncture, it said.

Acupuncture offers a promising and effective treatment option for chronic lower back pain, with few adverse effects or contraindications, study author Michael Haake from the University of Regensburg, Bad Abbach, in Germany said in the journal Archives of Internal Medicine.

Acupuncture works by normalizing the free flow of blood and body fluids throughout the body. Pain or illnesses is treated by attempting to remedy local or systemic accumulations or deficiencies.