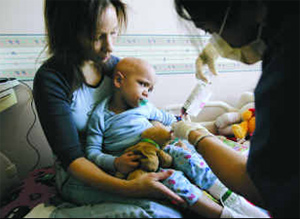 2-year old Caden Ledbetter has been suffering from cancer and thus not only has his hair and baby fat been lost, but also his freedom and sometimes his smile. He may have lost his life too, had it not been for a breakthrough stem cell transplant.

Stem cells that were taken from the little one’s umbilical cord at birth were pumped back into his body this Friday at the Medical City Dallas Hospital. Using a patient’s own cord blood is not common for any illness. The treatment fro neuroblastoma, a rare but deadly cancer that attacks the nervous system, is nearly unheard of.

“It’s either the second or third time it’s ever been done in the world,” said Joel Weinthal, Caden’s doctor.

Donors usually supply cord blood for transplants, but Caden’s parents paid to save his own.

Experts disagree on the long-term benefits of using a person’s own cord blood to treat cancer. Some physicians say the prenatal cells will just turn cancerous again over time.

Caden’s healthy cell will replace those contaminated by neuroblastoma. The disease had spread to his bones liver and bone marrow. Dr. Weinthal, a pediatric oncologist, says it’s the ideal treatment for the Coppell boy, who dodges the risk of rejecting someone else’s stem cells.

John and Lexie Ledbetter, Caden’s parents, put their faith in God rather than science.

“The doctors can do the best to heal him,” said Mrs. Ledbetter, 41. “But when it comes right down to it, you’ve got nothing but praying that God heals him.”