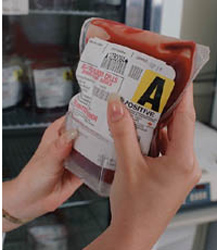 Researchers have stated that blood transfusions using banked human blood may actually do more harm than good because a crucial gas enabling oxygen to reach tissues is lost in storage.

Blood can deliver oxygen to tissues because of the presence of nitric oxide, which opens up vessels allowing blood cells to pass through.

But, new studies by experts at Duke University Medical Centre in North Carolina haved showed that the nitric oxide in blood breaks down almost immediately after leaving the body.

And if blood vessels fail to open, blocking blood flow and starving tissues of oxygen, the result can be a heart attack or even death, according to Dr. Jonathan Stamler, senior author of the report.

He said: “It doesn’t matter how much oxygen is being carried by red blood cells, it cannot get to the tissues that need it without nitric oxide.”

There were “clear indications of nitric oxide depletion” within three hours of blood leaving the body, said Dr. Timothy McMahon, another researcher.

He said: “Of concern to us is that nitric oxide levels become depressed soon after collection, suggesting that even ‘fresh blood’ may have adverse biological characteristics.”

However, the new report also found that artificially adding the gas to stored blood before transfusion could solve the problem and restore blood flow to normal.

Dr. Stamler said: “When we gave stored blood it couldn’t increase blood flow properly. However, after replacing the nitrous oxide, blood flow to the heart was increased, reflecting increased blood vessel dilation. This suggests that adding nitrous oxide to human banked blood could theoretically improve its ability to dilate blood vessels and thus prevent heart attacks and even death in patients.”

Dr. Stamler said transfusions were still important as they “could be life-saving” but he also called for large-scale clinical trials in humans, adding that there was “little doubt” transfused blood could be harmful.