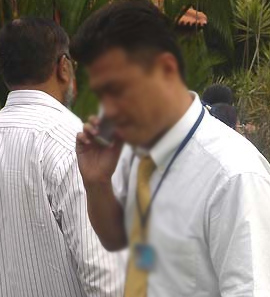 Just recently, we had reported about a study that found that use of mobile phones over a short-term period were safe. Now, a new study has found that the chance of developing a brain tumor doubles for those who are constantly hooked to their cell phones. This study, which was conducted by Swedish scientists, indicates that even just an hour a day on a mobile phone for a period of 10 years is enough to increase this risk.

According to Professor Lennart Hardell of the University Hospital in Oregro an Professor Kjell Hansson Mild of Umea University, long-term mobile phone users had double the chance of getting a tumor on the side of the brain where they held the phone for a period of over 10 years.

The Swedish team also called for special caution when it came to children. They said that children should be discouraged from using mobile phones because their thinner skulls and developing nervous systems made them especially vulnerable.

Previously, an Israeli study had found that just ten minutes on a cell phone could cause cancer. However, further studies were required on this one. And, even earlier than this, a study had found no evidence of mobile phones causing illnesses.

The latest Swedish study analysed the results of 11 previous studies carried out around the world. It examined long-term users because cancer can take more than a decade to develop. The researchers said almost all studies in the past had discovered an increased risk of cancer.

The study, published in the latest issue of the journal ‘Occupational Environmental Medicine’, said that those who used their phones for at least a decade were 20% more likely to contract acoustic neuromas (a type of brain tumour) and 30% more likely to get malignant gliomas (a common brain tumour).

Indian Council of Medical Research (ICMR) is conducting the study in five centres including PGI, Chandigarh. Individual trials are being conducted to look at how mobile phones can cause sleep disorders, memory lapses and hearing impairment.The Indian study is expected to show results in the next five months.

Sour taste gets activated by acid Stimulus according to a research