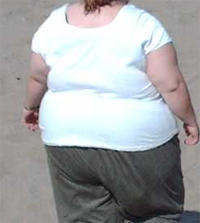 Obesity may trigger cancer in some women, says a new study that advises women to lead a healthier lifestyle if they want to cut the risk.

Researchers studied the health and lifestyle patterns of about one million women aged between 50 and 64 in Britain over a period of seven years. They found that more than 45,000 of the people under observation developed cancer and 17,000 died of cancer during the course of the study.

The findings showed that excess weight significantly increased the risk of cancer.

‘We estimate that being overweight or obese accounts for around 6,000 out of a total 120,000 new cases of cancer each year among middle-aged and older women in Britain,’ said lead researcher Gillian Reeves from Oxford University.

‘Our research also shows that being overweight has a much bigger impact on the risk of some cancers than others. Two thirds of the additional 6,000 cancers each year due to excess weight or obesity would be cancers of the womb or breast,’ he said.

The study found that the link between weight and risk of cancer depended on a woman’s age.