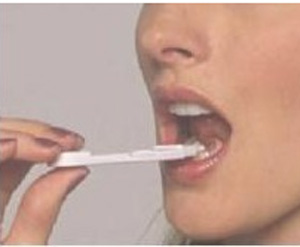 Dentists may soon use their patients’ saliva for signs of breast cancer. Scientists in the US have found marker proteins in human saliva which can diagnose the disease. They are now developing a simple testing device designed specially for dentists.

The discovery was made by Catherine Flaitz, dean of the University of Texas Dental Branch. She said: “Dentistry has entered an exciting new era.”

Researchers in Houston analyzed saliva samples from 30 patients and found 49 proteins that differentiated those who were healthy and who had breast cancer tumors.

Crucially, the proteins could also distinguish between tumors that were benign or malignant.

The scientists imagine that the test could be used alongside existing detection tools, such as mammograms, ultrasound and tissue sample analysis.
Information from the saliva test could eliminate possible false positive results. It would also allow doctors to make better treatment decisions.

Professor Charles Streckfus, who led the research, said a team of biochemists at the university are now developing a portable device for conducting breast cancer saliva tests.

It is hoped the device will eventually be reduced from the size of a refrigerator to that of a mobile phone. Clinical trials of the prototype are already in the planning stage.