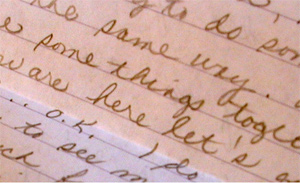 A new study in Britain has indicated that handwriting can reveal whether a person has a heart condition. However, some scientists disagree with this.

Handwriting researcher Cristina Strang, who led the study in Britain, said previous studies have only focused on the effects of neurological conditions such as Parkinson’s, Huntington’s and Alzheimer’s diseases on a person’s handwriting.
She wanted to see if cardiac disease could also have an effect on the handwriting.

She analyzed magnified samples of writing for various features, including breaks in the writing, malformed ‘O’s, resting dots and where the pen rests momentarily in the middle of a pen stroke.

Her study found that people in the cardiac clinic group had a statistically significant higher number of resting dots than the control group, especially in the upper middle zone of the letters ‘a’, ‘e’ and ‘o’.

Strang, who presented the findings at an international conference in Melbourne, said much research in this area has been very unscientific and she is attempting to bring some rigor to it.

However, Karen Stollznow, an expert of the Australian Skeptics, said: ‘Simply, there isn’t any evidence to correlate heart disease with handwriting style, or to suggest that handwriting style can be used to accurately diagnose illness.’