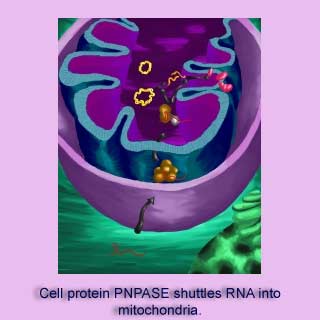 The cell protein known as polynucleotide phosphorylase (PNPASE) is believed to be the energy-producing ‘power plant’ of the cell. Experts from the UCLA have supposedly determined the role of this cell protein in altering RNA into the mitochondria. It has been affirmed that PNPASE controls the energy producing function of mitochondria by mediating cytoplasmic RNA import.

For the replication, transcription and translation of the mitochondrial genome, the import of nucleus-encoded small RNAs into a cell’s mitochondria is known to be important. Yet, the method of RNA delivery into mitochondria is said to have not been appropriately comprehended. In the course of the investigation, it was found that with decrease in the expression of PNPASE, RNA import seemingly declined further leading to impairment in processing of mitochondrial genome-encoded RNAs.

“This discovery tells us that PNPASE regulates the energy producing function of mitochondria by mediating cytoplasmic RNA import. The study yields new insight for how cells function at a very fundamental level. This information provides a potential new pathway to control mitochondrial energy production and possibly impact the growth of cells, including certain types of cancer cells,” added Dr. Michael Teitell, a professor of pathology and laboratory medicine, a Jonsson Cancer Center researcher and co-senior author of the study.

Scientists noticed that with decline in RNA processing the translation of proteins was avoided. This translation seems to be vital for maintaining the electron transport chain that manages the conversion of oxygen into adenosine triphosphate (ATP), the energy currency of a cell. In the presence of decreased PNPASE, unprocessed mitochondrial RNAs appeared to have gathered, protein translation was prevented and energy production was adjusted. All these factors apparently delayed cell growth.

Carla Koehler, a professor of chemistry and biochemistry, a Jonsson Cancer Center researcher and co-senior author of the study elucidated, “When we’re talking about looking for ways to cure cancer, we fundamentally need to understand what makes cells grow and die, and the mitochondrion is right at the heart of these issues. This new and novel pathway for transporting RNA into the mitochondria is shedding new light on the evolving role and importance of mitochondria function in normal physiology and a wide variety of diseases. If we can understand how this pathway functions in healthy cells, we could potentially uncover defects that help in transforming normal cells into cancer cells.”

Mitochondria are known as the cellular power plants because they generate most of a cell’s energy supply. They also appear to be involved in various other cellular processes, such as signaling, differentiation, death, control of the cell cycle and growth. The findings may be beneficial in analyzing and treating certain cancers, which depend upon cellular energy to grow and spread as well as mitochondrial disorders including neuromuscular diseases. Novel targeting pathways for neurodegenerative disorders like Parkinson’s and Alzheimer’s diseases may also be found as they too are associated to the function of mitochondria.

Carla concluded, “The cell would lose most of its ability to make energy. It would be crippled. Mitochondria are fantastically complex, and our study reveals another cellular pathway in which these tiny but important powerhouses participate in essential cell activities, such as the generation of energy essential for life.”

First discovered in 2004, PNPASE was previously examined for ascertaining proteins involved in interacting with TCL1. It was affirmed that the cell protein has a signature sequence and it traffics into and localizes within the mitochondria of cells. Experts believe that PNPASE meditates the movement of RNA from the cell cytoplasm into the matrix of mitochondria.

While cell cytoplasm is claimed to be the area of the cell enclosed by the cell membrane, matrix of mitochondria is the accurate location of the mitochondrial genome. This protein is assumed to act as receptor and bind to cytoplasmic RNAs with a specific stem-loop signature sequence, mediating import. In the absence of this RNA import, the cell may be lacking the machinery to assemble the mitochondria’s energy source.

The research was published August 5 in the journal Cell.