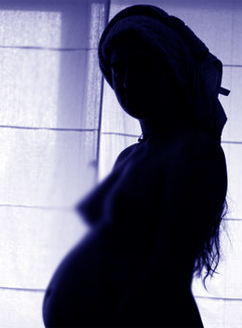 Have you ever wondered what really stops big-bellied pregnant women from losing their balance when on their feet? Well, this mystery seems to be solved as US researchers have suggested that women’s spines have ‘evolved’ to better accommodate the weight of her unborn baby.

Scientists at Harvard University and the University of Texas in Austin found out through a study that women’s lower spines have evolved to be more flexible and supportive than those of men. The main reason for this is that having a flexible spine helps to increase comfort and mobility while bearing the weight of the growing child in her womb.

The researchers explained that the increased flexibility of lumbar vertebrae allows a pregnant woman to shift her growing centre of abdominal mass squarely over the hip, knee and ankle joints, thereby stabilizing posture and preventing serious back pain or injury.

“Pregnancy presents an enormous challenge for the female body. The body must change in dramatic ways to accommodate the baby, and these changes affect a woman’s stability and posture,”said lead author Katherine Whitcome, a postdoctoral researcher in Harvard’s department of anthropology.

“It turns out that enhanced curvature and reinforcement of the lower spine are key to maintaining normal activities during pregnancy,” she added.

The study involved 19 women aged 20 to 40 throughout their pregnancies and measured changes in spinal curvature as women leaned back to compensate for being front-heavy. They found that as a woman approached the end of pregnancy, the degree she leaned back often increased dramatically boosting the curvature of the lumbar spine by as much as 60%.

Since women’s lumbar vertebrae are relatively larger and flare out farther down the spine than those of males, they “stabilize the vertebral column and allow women to assume these postures without injury,” Whitcome said.

Interestingly, the researchers also examined fossilized lumbar vertebrae from early humans that lived in Africa around 2 million years ago. The researchers feel that it was about that time that a more flexible female spine began evolving as an adaptation to walking upright.

“You can imagine that any serious back injury, any painful back injury could be catastrophic in that it would limit a female’s ability to perform the tasks she needs to. Our ancestors, those pregnant females, were spending hours during the day foraging for food, traveling, avoiding predators,” Whitcome said