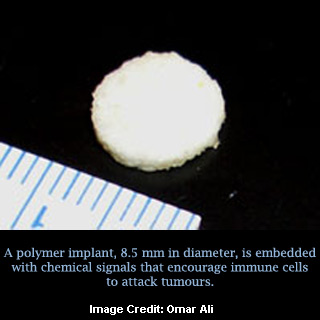 A team of Harvard bioengineers and biologists have discovered that a cancer vaccine carried into the body on a carefully engineered, fingernail-sized implant seems to be the first vaccine to efficiently remove tumors in mammals.

The novel approach supposedly makes use of plastic disks impregnated with tumor-specific antigens. Moreover, they appear to have been implanted under the skin to reprogram the mammalian immune system to attack tumors. The findings seem to describe the use of such implants to eradicate melanoma tumors in mice.

David J. Mooney, the Robert P. Pinkas Family Professor of Bioengineering in Harvard’s School of Engineering and Applied Sciences and a member of the faculty of the Wyss Institute for Biologically Inspired Engineering said that, “This work shows the power of applying engineering approaches to immunology. By marrying engineering and immunology through this collaboration with Harvard Medical School associate professor Glenn Dranoff, at the Dana-Farber Cancer Institute, we’ve taken a major step toward the design of effective cancer vaccines.”

Most cancer cells may be able to easily evade the immune system, which operates by identifying and attacking invaders from outside the body. The latest approach developed by Mooney’s group seems to redirect the immune system to target tumors. In addition, it appears both more effective and less cumbersome as compared to other existing cancer vaccines in clinical trials.

Conventional cancer vaccinations are known to remove immune cells from the body, reprogram them to attack malignant tissues and return them to the body. However, more than 90 percent of re-injected cells appear to die before having any effect in experiments.

The slender implants developed by Mooney’s group seem to measure nearly 8.5 millimeters in diameter. Also, they are known to be made of an FDA-approved biodegradable polymer. Ninety percent air, the disks are noted to be highly permeable to immune cells and release cytokines. These cytokines seem to be powerful recruiters of immune-system messengers called dendritic cells.

Apparently, these cells enter an implant’s pores, where they are exposed to antigens specific to the type of tumor being targeted. It was observed that the dendritic cells then account to nearby lymph nodes, where they direct the immune system’s T cells to chase down and kill tumor cells.

“Inserted anywhere under the skin — much like the implantable contraceptives that can be placed in a woman’s arm — the implants activate an immune response that destroys tumor cells,” explains Mooney.

The technique could possibly have powerful advantages over surgery and chemotherapy. Moreover, it may be useful in combination with available therapies. In addition, it only seems to target tumor cells in turn avoiding collateral damage elsewhere in the body. Much as an immune response to a bacterium or virus generates long-term resistance, scientists anticipate that cancer vaccines could perhaps generate permanent and body wide resistance against cancerous cells. This may provide durable protection against relapse.

“This approach is able to simultaneously upregulate the destructive immune response to the tumor while downregulating the arm of the immune system that leads to tolerance. In cancer, this latter arm is typically a limiting feature of immunotherapies, since it can extinguish vaccine activity and afford tumors a degree of protection,” Mooney continues.

He claimed that the latest approach’s strength lies in its ability to simultaneously control the two arms of the human immune system namely, one that destroys foreign material and one that protects tissue native to the human body. The implant-based vaccine could be able to recruit several types of dendritic cells that direct destructive immune responses. This may in turn create an especially potent anti-tumor response.

The findings of the study have been published in the journal, Science Translational Medicine.