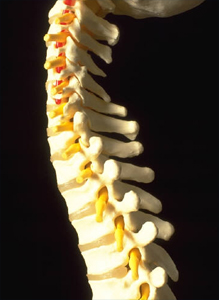 According to the largest and longest prospective study of osteoporosis, a single bone mineral density test given 15 years earlier predicted a woman’s risk of developing fractures to her spine over time.

The study which was conducted by researchers at the University of Pittsburgh Graduate School of Public Health, found that women who had a spinal fracture at the start of the study were 4 times more likely to have another fracture.

In fact it was found that over half the women with low bone mineral density and existing spinal fractures developed new fractures over the 154-year study period. This raises concerns about the impact of the so-called “silent” fractures of the spine.

“Spinal fractures are the hallmark of osteoporosis, but one of the problems with diagnosing them is that they often have no symptoms. Many women may be walking around with multiple fractures and not even know it. Our study raises concerns about the impact of these fractures on quality of life by putting women at risk for subsequent fractures, but it also provides evidence that a simple and non-invasive bone density test can help identify those at risk,” said Jane Cauley, Dr.P.H., professor of epidemiology, University of Pittsburgh Graduate School of Public Health.

The findings are based on 2,300 women over the age of 65 enrolled in the Study of Osteoporotioc Fractures (SOF), a longitudinal, multi-site study initiated in 1986 to learn about the risk factors and causes of the disease that affects an estimated 10 million Americans.

For the current study, investigators from five institutions took lateral radiographs of the thoracic and lumbar spines of research participants and measured their BMD and body weight. Researchers found that by year 15 of the study, 18 percent of the women had experienced spinal fractures. They also found that 25 percent of women who began the study with low BMD developed spine fractures, compared to only nine percent of women with normal BMD.

According to Dr. Cauley, the study’s results demonstrate the importance of BMD testing for women over the age of 50. About 700,000 spinal fractures occur each year in women in this age group, and 75 percent of these fractures occur without symptoms. Spinal fractures result in chronic back pain and increased risk of other fractures, including those in the hip.

“Women don’t have to end up with dowager’s hump, the hallmark of osteoporosis,” said Dr. Cauley.
Dowager’s hump indicates that a woman has endured multiple spine fractures.

“Osteoporosis is not an inevitable consequence of aging. Under-diagnosis remains a major problem. There are several effective treatments for osteoporosis that can prevent subsequent fractures, so it is vitally important to recognize these fractures with repeat spine films over time.”

Based on the results of the study, Dr. Cauley and colleagues are developing a risk model to help physicians better identify women who are more likely to have a silent spine fracture and who may benefit from treatment.