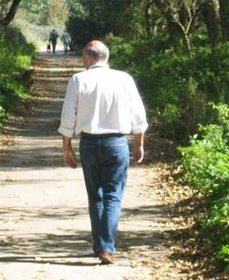 Moderate physical activity such as walking and climbing stairs may help prevent dementia in people aged 65 and older. Italian researchers have reported this news in the online edition of Neurology which cites the study which observed 749 Italians aged 65 and older for four years.

When the study started, participants didn’t have dementia or mild cognitive impairment, which can lead to dementia. They noted their weekly physical activities, including how many city blocks they walk and how many flights of stairs they climb in a day.

By the end of the study, 86 people had been diagnosed with dementia. They included 57 people with Alzheimer’s disease and 27 people with vascular dementia, which is dementia related to problems with blood vessels in the brain.

“It is important to note that, in terms of lowering vascular dementia risk, an easy-to-perform moderate activity like walking provided the same benefits of other, more demanding activities,” write the researchers, who included Giovanni Ravaglia, MD, of the University Hospital in Bologna.

Ravaglia and colleagues adjusted the data in light of medical, social, and genetic dementia risk factors. The findings held.
Still, the study doesn’t capture every trait that affects a person’s chance of developing dementia.