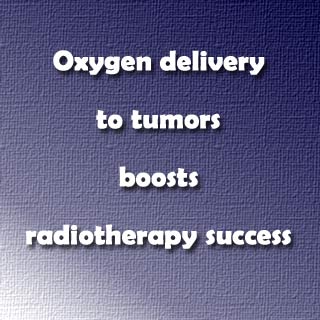 UK scientists from the Cancer Research UK–MRC Gray Institute for Radiation Oncology & Biology at the University of Oxford seem to have recognized a brand new technique in order to treat cancer. This novel approach may perhaps completely increase the effectiveness of radiotherapy.

For the purpose of the study, scientists treated mice with certain drugs. These drugs, apparently improved the solidity of blood vessels in the tumors. Usually, these blood vessels appear to be poorly developed, weak and twisted and because of which cancer cells seem to have lower oxygen levels in contrast to normal cells.

Professor Gillies McKenna, director of the Institute stated that, “We are very excited to have uncovered this brand new approach to cancer treatment – where the drugs prime the cancer cells for radiotherapy. It’s a counterintuitive technique because you might expect that by increasing an oxygen supply to tumor cells you would help them grow – but actually by oxygenating the cell with a better blood supply we enable radiotherapy and chemotherapy to do a better job of killing them.”

It was believed that the drugs were induced into the mice at specific doses which did not alter tumor growth. However, the effects of the drugs seem to have acted in order to increase the blood supply to the tumors. Supposedly, scientists examined the effects of four drugs which were in clinical use for cancer therapy. They discovered that the drugs seemed to have blocked a cell signaling pathway which is usually activated in cancer cells.

Professor McKenna further added that, “Previous work by our group had shown that treatment with some of these types of drugs could improve radiotherapy, but it was not understood how. Now with the new understanding, strategies could be developed to use these drugs to ‘soften up’ tumor cells before treating them with radiotherapy.”

Dr Lesley Walker, Cancer Research UK’s director of cancer information, stated that, “For a long time scientists have been looking for ways to boost the oxygen supply to tumors to improve response to treatment and make radiotherapy even more effective. We still need to do more work on this technique but boosting the effects of radiotherapy and chemotherapy are very exciting developments that hold real potential for use in patients.”

The findings of the study revealed that, by improving the blood vessels, scientists seemed to have improved the oxygen concentration inside the tumor. Also, the concentration of oxygen has an effect on the blood vessels which seems to boost tumors’ sensitivity to radiotherapy. Allegedly, an improved and more stable blood supply in the tumor appears to allow better release of chemotherapy drugs to the cancers.

The findings of the study have been published in the journal of Cancer Research.