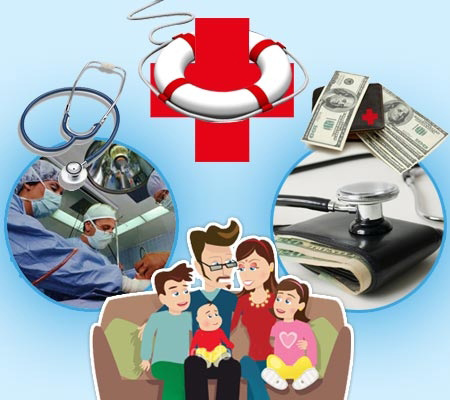 18 month old Michelle Williams developed 106 degrees fever and was having difficulty breathing and was taken to the emergency room. The doctor suspected septicemia but did not initiate blood tests and treatment because the hospital was not covered by Kaiser, the insurance company. After much delay when the child was transferred to a Kaiser facility, she had already suffered a seizure and died within 15 minutes of arrival from cardiac arrest.

A much publicized trial followed. Such and other lesser known cases of America’s failing healthcare system are portrayed in Michael Moore’s Sicko. The documentary is both shocking and touching.

And though Corporates try to defy the claims and experts split hairs over the numbers, the truth is nearly 50 million American citizens are without health insurance. And in a country where some painkillers can cost more than 50$, falling sick can be the worse thing one can do!

The US spends almost up to 15% of its GDP on healthcare, which is twice the amount spent by most developed countries. It spends the highest amount in dollar terms on healthcare (2 trillion), yet it ranks 37th on WHO’s list.

What is Health Insurance?

Medical insurance is a type of insurance that covers medical risk. In different forms, it may cover acute cases, long-term disability etc. it may be in the form of taxes by Government or premiums collected by insurance companies. It may be bought by individuals or groups, such as employee insurance. Insurance, as they say, is a business of risk, but not a risky business. All insurance companies work on the claims ratio, i.e. amount claimed by its customers for medical treatment to the total amount collected by the company by way of one-time entry or ticket charges and premiums. If more is claimed than collected, the company will probably go into loss. Of course, the company invests the capital it generates in equity and otherwise, but administration costs are also huge. It’s not difficult to follow that lower the claims accepted; more profitable is it for the company, leading to a host of controversies involving medical underwriting and medical negligence.

The other system is through state-run federations where the government provides universal healthcare through taxes. Mr. Moore’s movie shows the supposedly dreaded socialistic medicine systems of the UK, Canada, France and even Cuba!

France is ranked no. 1 in WHO’s list of best Healthcare systems. Following are some of the parameters that WHO looks at:

Obviously, US, with the fattest healthcare bill and yet with nearly 50 million people not covered by insurance scores poorly. The question off course is where is all the money going?

The documentary shows doctors in France making house calls around the clock at the ring of a phone for cases as innocuous as a stomach upset. It shows how in UK, no payments are made anywhere in the state-run hospitals. In fact, when you check out, a ‘chasier’ gives you money for traveling and the likes!

People have been known to actually smuggle drugs from Canada as they are freely available at rock-bottom prices. Cuba has highly organized pharmacies where most drugs are available at less than one-tenth of US prices and hospitals where the only formalities for entry are your filling up your name and date of birth!

Indemnity is the general principle of insurance wherein in a party B makes due for loses suffered by a party A in return for an agreed-upon terms of payment by A. so you, as party A, pay small installments to mitigate the risk of incurring a one-time killer cost. You essentially pay your premiums, hoping you’ll never need to claim them, especially in the case of health insurance.

Party B manages the risk of many such parties, working on the probability that all parties will not incur a huge cost, not at once anyway. Insurance as they say is a business of risk, but it’s not a risky business. In any given population, there will be people who are healthy and those who are not too healthy, rich and not so rich, young and old and so on. Take up any application form for insurance and the list of pre-existing conditions that disqualify you for insurance is huge, of telephone directory proportions! If in case you do qualify, the premium you pay rises in direct proportion if not exponentially as per your health and ‘perceived risk of falling ill’ – makes good business sense. By not covering the ‘risky candidates’, healthcare is denied to the ones who really need it. And if God-forbid, you do fall ill, the conditions that your claim must qualify would seem in most cases to be beyond unfair.

The other way, i.e. by taxes means, ‘you pay according to your means and receive according to your needs’. People in countries like Canada and France agree to pay according to their means, thereby covering the less fortunate, and at the same time, everyone can be assured of getting all the help they need. Sounds better, doesn’t it? The challenges are off course of governance, efficiency and transparency. Also, it does not leave as much room for profiteering which leads us to…

The multi-billion dollar Pharma companies, hospitals and insurance companies slug it out in a highly competitive environment. In the US, a large part of the budget of Pharma companies goes into getting their drugs approved by the insurance companies. This is because unless the drug is on the approved list, your insurance won’t cover it. And most drugs are priced so high to cover for the billions spend in research, it is impossible to pay for it out of pocket. Now imagine being in the ICU urgently needing a cardiac drug that is not covered and costs more than your annual income!

The other side of the story:

Ethically ignorant profiteering seems to come naturally to most people. The costs incurred in false claims are huge. People have been caught trying to cash in on the same bill from different hospitals, faking an entire medical episode, misusing prescriptions for drug abuse and even peddling! Insurance cover my also make you take things for granted, getting a whole gamut of expensive diagnostic tests done at the first sight of a flu or paying ten times as much for a routine surgery in a 5-star hospital. This is in part the reason why insurance companies have had to resort to strict checks at all stages. So much so that all medical tests and even ambulance rides have to be pre-approved by panel doctors. In addition, looking at the pattern of spending and to cover for the huge costs that are written off, premiums are pushed up. So consumers need to realize that misusing their policy is really self-defeating for themselves and everyone else.

Most policies only cover critical care and episodic events like a fracture or an unforeseen heart attack. The costs for such cases are astronomical. It would make much for sense economically and from the point of view of welfare to adopt a preventive model. The cost of early diagnosis, life style changes and health management would be much less than acute treatment and it would also save a lot of suffering. Many companies including the likes of Toyota have started their own healthcare systems instead of buying group covers. Focusing on holistic well being, this system can save companies millions and also increase efficiency.

One of the cases in Sicko shows a man suffering from kidney cancer. Doctors suggested a bone marrow transplant which the insurance companies claimed was ‘experimental’ and chances of success were negligible. The man is survived by a wife and a child.

The movie does not cover many aspects such as about 50% of American healthcare costs covered by government schemes, dizzying costs of most treatments, many of which have a poor success rates and loses suffered from false claims. As far as countries having universal healthcare are concerned, not all modes of treatment are covered. Only regimens decided on a case-by-case basis by physicians that work for the state are paid for. Any treatment outside this has to be paid for out of pocket. Waiting times for certain operations can be up to 1 year.

Thus, timely and appropriate healthcare for those who most need it can only result form a very complex balancing act by all stakeholders. However, what it all boils down to is, should complex mathematical possibilities decide whether a person gets a chance to live?