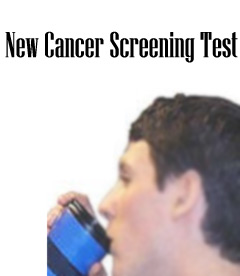 Your early morning gargle with mouthwash could someday become more than just a breath freshener, as it could help spot head and neck cancers, according to scientists at the Johns Hopkins Kimmel Cancer Center. New studies of a mouth wash that captures genetic signatures common to the disease, now holds promise for screening those at high risk including heavy smokers and alcohol drinkers.

Scientists at the Johns Hopkins Kimmel Cancer Center in Baltimore are now developing a saliva test that could spot diseases like mouth and throat cancer in high risk people. This saliva test would be inexpensive, easy to perform and very painless as well.

Basically, the screening test focuses on finding cells with genetic signatures that suggest the presence of the above mentioned cancers.

In the “swish-and-spit” test, patients were asked to brush the inside of their mouths, then rinse and gargle with a salt solution. The scientists filtered out cells in the rinsed saliva that might contain one or more of 21 bits of chemically altered genes associated with head and neck cancers.

“We know who gets head and neck cancer — people who smoke and drink a lot and tend to be at an older age. The problem is that it’s sometimes difficult to diagnose until it’s at its late stages and difficult to treat and cure,” researcher Dr. Joseph Califano of the Johns Hopkins department of head and neck surgery said.

As of now there is no screening test for head and neck cancers as such.

“So it would be nice to have an easy way to identify people at risk for head and neck cancer that can be done by anybody — a nurse, a doctor, a PA (physician assistant),” he said.

For the study, the mouth rinse test was given to 211 people with head and neck cancers and to another 527 people who did not have these cancers. The test correctly identified over half the people with cancer as having the disease.

Further, the researchers have even made changes to improve the test, after this study was completed.

Califano, who expects it could be years before the test is widely used said, “I think it’s actually going to be really fairly impressive in terms of ability to detect stuff.”