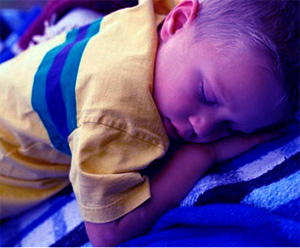 According to new research by scientists in New Zealand, children who do not get enough sleep face an increased risk of obesity and behavioral problems. The scientists from the University of Auckland say they have found that seven-year-olds who had less than nine hours per night were more than three times more likely to be overweight or obese than those who slept for longer.

The researchers led by Professor Ed Mitchell, suggest that when sleeping time is restricted it leads to hormonal changes in the stomach and in fat cells that trigger increased appetite.

Professor Mitchell says sleep is important for health and well-being throughout life and paying attention to sleep in childhood may be an important strategy to reduce the obesity epidemic.

Professor Mitchell says their study results show a strong effect of short sleep duration on the risk of obesity which is independent of physical activity or television watching and remained even when levels of daytime activity were adjusted for.

Professor Mitchell and his colleagues studied the sleep patterns of a group of 519 children from Auckland using an electronic device called an actigraph (a non-invasive method used to study sleep-wake patterns and circadian rhythms by assessing movement).

This was done at four different stages of their lives: at birth, at one year, at three-and-a-half years and at seven years.

These were then used along with measurements of height, weight, body mass index (BMI) and body fat levels taken for each participant.

BMI is calculated by multiplying weight in kilograms by height in metres squared. A BMI of 20 to 25 is considered normal, 25 to 30 overweight, and over 30 obese.

The average length of sleep was 10 hours and six minutes but sleep duration was found to be shorter on weekends than on weekdays, in the summer, in those with no younger siblings and when bedtime was after 9:00 p.m.

The researchers believe lack of sleep leads to increased production of ghrelin, a hormone produced in the stomach, and reduced release of the hormone leptin in fat cells; both of these changes have been shown in previous studies to stimulate appetite.

Other research also published this week by researchers from the University of Chicago Medical Centre has found that a lack of sleep, especially deep or slow-wave sleep, reduces the body’s ability to regulate blood sugar levels, increasing the risk of Type 2 diabetes, which is linked to obesity.

Over the last 20 years, child obesity rates have trebled with one in 10 six-year-olds and 17 per cent of 15-year-olds now considered obese.
A plethora of research in the last year or so has laid the blame on just about everything from television, computers, junk food, soft drinks, school canteens, lack of activity and various others possible culprits.

The American Academy of Sleep Medicine offers parents of children with sleeping problems the following advice:- interaction with youngsters at bedtime, avoiding television or computer games for long periods before bedtime and a ban on programmes or computer games inappropriate for their age.
Ensuring a relaxing environment in the bedroom and a consistent routine, with 10-30 minutes set aside to prepare for bed is also important.

Children should not fall asleep while being held, rocked or fed and drinks or food containing caffeine or medicines that contain stimulants should be avoided, this includes chocolate and sodas.

Parents who suspect that their child might be suffering from a sleep disorder are urged to consult with their child’s pediatrician or a sleep specialist.
Professor Mitchell says short sleep duration is associated with a three-fold increased risk of the child being overweight or obese.

Finally, it is recommended that children in pre-school sleep between 11-13 hours a night and school-aged children between 10-11 hours of sleep a night.