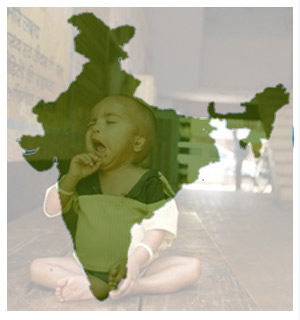 According to the United Nations’ Children Fund (Unicef), every year 2.1 million children in India do not survive to celebrate their fifth birthday, and one out of every five children under age of five dying worldwide is an Indian. In a UNICEF report on “The State of the World’s Children 2008” released on Tuesday, the Unicef said that India is number one in children’s deaths across the globe.

“India accounts for over 20 percent of under-five children’s deaths. What is more shocking is that 25 percent of children dying (worldwide) before 20th day after their birth are from India,” said Gianni Murzi, country representative of Unicef India.

“Though the number of deaths has gone below the 10 million mark worldwide, there is no place for complacency. Our challenges remain intact. We (both India and the Unicef) need to work together for scaling up efforts and achieving progress in this field.

“India’s future lies with these children and its economy cannot continue to grow without them. Investment in child care is the best investment any country can make,” Murzi said at the report release function.

However, he said, the death of a children every three seconds is a very bad sign.

Portraying a bleak picture of the neonatal health scene in the country, the report said, 38 percent of children’s death happen before they reach even the seventh day after their birth and 12 percent deaths occur between the seventh and 28th days.

“India has made some good progress but there is a lot of scope for improvement. 2008 is the year when we need to work together,” Murzi added.