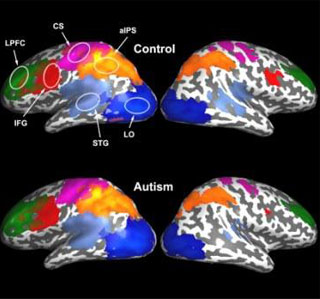 Subjective analysis of autism is usually possible only after the age of 3 or 4. Now, a study conducted by a team of scientists from Weizmann Institute of Science, Carnegie Mellon University and the University of California, San Diego has disclosed a technique that can rightly recognize a biological symptom of autism in very young toddlers.

By a process which involves scanning the brain activity of children who are asleep, the scientists were able to uncover that the autistic brain displayed poor synchronization between brain portions associated with language and communication, unlike non-autistic children.

postdoctoral fellow Dr. Ilan Dinstein, a member of the group of Prof. Rafael Malach, who headed this study in the Weizmann Institute’s Neurobiology Department, shared “Identifying biological signs of autism has been a major goal for many scientists around the world, both because they may allow early diagnosis, and because they can provide researchers with important clues about the causes and development of the disorder.”

Many investigators are of the opinion that inaccurate paths of communication between varied regions of the brain lead to a sequence of autism disorders. There was no method to examine this change in very small kids as they are unable to lie unmoved in an fMRI scanner while they are awake.

The Malach team soon found a solution. Their analysis showed that even during sleep, the brain does not apparently switch off. Instead, the electrical reactions of the brain cells transfer to instinctive fluctuation. These alterations are integrated around the two hemispheres of the brain in a way that each point on the left is in sync with its respective point in the right hemisphere.

The fMRI scans of sleeping autistic toddlers, presented reduced proportions of synchronization between the left and right brain portions that is usually related to language and interaction. These series of changes were seemingly not found in children with natural growth and in those with late language development who were not autistic. The levels of sync and symptoms of autism appeared to be directly related to each other. It was found that poorer correlation resulted in heavy symptoms of autism. These scans supposedly identified 70% of the autistic children in the age-group of 1 to 3.

The study is published in the journal Neuron.