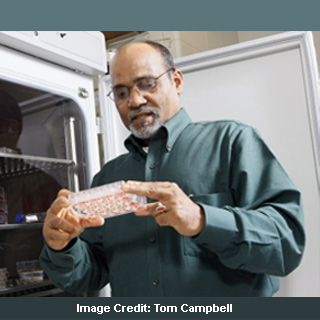 The bacteria listeria seems to unravel some astonishing secrets in the following article. Arun Bhunia, a professor of food science, and Kristin Burkholder, a former Purdue graduate student who is now a postdoctoral researcher in microbiology and immunology at the University of Michigan Medical School assert that pathogenic listeria tricks intestinal cells into helping it pass through cells known for developing sickness in people. It was observed that if listeria fails to mislead, it may just go around the cells.

Even low doses of listeria caused intestinal cells to express a unique protein called heat shock protein 60, which probably acts as a receptor for listeria. This protein seemingly enables the bacteria to invade the cells in the intestinal wall and find its way into a person’s bloodstream. Host cells supposedly develop more heat shock protein 60 for safe guarding themselves during a stressful event such as an infection. If the researchers are to be believed then, listeria profits from this by employing proteins as receptors to boost infection.

Known as foodborne bacteria, listeria monocytogenes seems to be the cause of fever, muscle aches, nausea and diarrhea, along with headaches, stiff neck, confusion, loss of balance and convulsions once spread to the nervous system. It appears that listeria passes between intestinal cells to seep out of the intestines, into the bloodstream for triggering infection. Listeria in cultured intestinal cells apparently revealed elevation in the heat shock 60 protein. The bacteria was then introduced to intestinal cells in the upper half of a dual-chamber container and number of bacteria passing through the cells as well as in the lower chamber were counted.

The outcome was that bacteria possibly moved to the lower chamber more rapidly than is known to do while moving through cells. Elevation in movement of listeria was also registered when a mutant form of the bacteria that do not invade the intestinal cell was put to test. So scientists predict that the bacteria moved around the cells. Additional investigations will be triggered to shed light on the way listeria together with the protein interacts. Also means to protect intestinal cells from the bacteria will be apparently developed in the near future.

The research is published in the online version of the journal Infection and Immunity.