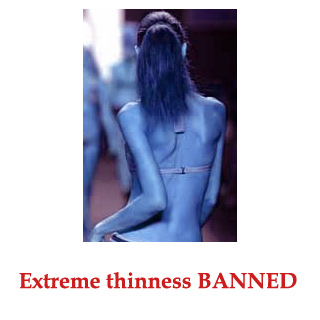 In the recent modeling scene, models are going so thin that they could actually make anorexia also too fat a term for description.

But does it end on the ramp? Not really. The effect of such figures on the common people and efforts to ape the same is not unknown to anyone. However, there may just be a ray of hope.

Paris is not only the capital of France, but it is almost the fashion capital of the world. Now interestingly, the French parliament’s lower house is planning to adopt a landmark bill that will make the promotion of extreme thinness illegal. All media sources including fashion, marketing campaigns, online mediums etc, will have to comply by the regulations noted in this bill. Once this groundbreaking bill finds its way into the legal books, it will be regarded as one of the strongest bills of its kind.

All the same, the latest bill is not being met with smiling faces by the French fashion industry.

In 2006, 21-year-old Brazilian model Ana Carolina Reston’s anorexia-linked death shocked the world. She weighed only 88 pounds (36 kgs). The bill, which is the most recent and strongest of measures, has been proposed after the death of Reston, prompting efforts throughout the international fashion industry to address the consequences of using bone-thin models.

In fact, some lawmakers are going a step further and are in the works of proposing that encouraging vast weight loss and anorexia should be punishable in the court of law.

Conservative lawmaker Valery Boyer, who has introduced the proposed law, construes that the legislation is much broader and could go beyond the sphere of fashion, and can target marketers inducing women to eat one fruit a day and not much else, too.

Reportedly, Boyer stated that if someone was found guilty encouraging others to deprive themselves of food, the judges could go ahead and rule imprisonment and fine offenders up to $47,000.

The French bill is extended to male models as well.

For sure, such a legislation does once again raise a very significant topic. In fact, the extreme methods of crash diets, rigorous exercising and even resorting to things like bulimia need to be controlled too. And perhaps the only way of inducing this is by promoting the fact that remaining healthy and fit is the true mantra, rather than being ultra-thin.