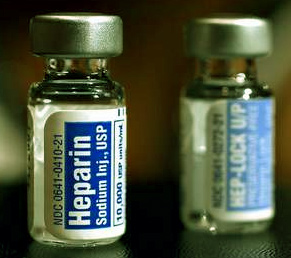 A contaminated blood thinner has caused a dispute between Chinese and FDA officials. While the Food and Drug Association (FDA) have charged the Chinese manufacturer of having inadequate systems for testing the raw material, Chinese officials allege that the contamination must have occurred in the US. The contaminated heparin samples have been found in 11 countries and have caused around 81 deaths in the US alone. The deaths have reported to be caused due to allergic reactions after large amounts of Heparin were administered.

The raw Heparin is processed in China, where it is derived from pig intestines and then processed by small workshops which are often the unregistered ones. The manufacturers in question are Wisconsin-based Scientific Protein Laboratories, which owns a Chinese factory – Changzhou SPL – and buys further raw heparin from other Chinese dealers.
The Baxter International plant in Cherry Hill, New Jersey, receives the raw ingredient and the finished heparin vials are made.

Chinese officials are planning to visit and investigate the conditions under which the raw material is further developed and packaged at Baxter International and take back few samples for investigation. “When you see it, then you believe it,” said Jin Shaohong, the deputy director general for the National Institute for the Control of Pharmaceutical and Biological Products in China. “We don’t have a strong evidence to show that it is heparin or its contaminant that caused the problem,” said the official, Ning Chen, second secretary at the Chinese Embassy, at an Embassy news conference.

Chinese officials also claim that there were records of allergic reactions and adverse events in the US even before the contamination occurred. The FDA and Baxter International officials disagree with the claims. “We do not agree with that,” a Baxter spokeswoman, Erin Gardiner, said. “We have seen adverse event reports on batches where the contaminant has been confirmed to be present.” However, Baxter is considering China’s request to conduct further testing, by providing additional heparin samples. FDA has warned the Chinese manufacturers on the low safety standards they have after citing ‘significant deviations’ from good manufacturing processes.

The contamination was also found in Germany and some batches of heparin were recalled after some patients encountered illnesses. 10 other countries – Australia, Canada, China, Denmark, France, Italy, Japan, the Netherlands, New Zealand and the United States have been reported as the ones receiving contaminated supplies while the Chinese officials claim other wise. FDA has identified 12 other Chinese companies that are involved in the supply of contaminated Heparin.

There has been an ever growing tension between the US and China since the time there have been reports on unsafe Chinese imports like poisonous toothpaste, lead-painted toys, toxic pet food, contaminated fish and the most recent tainted medicine.