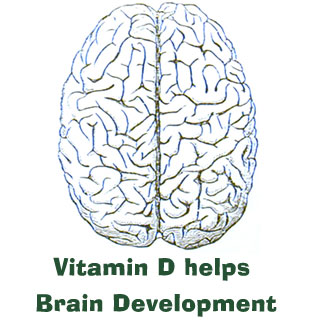 It’s known to all of us that Vitamin D plays an important role in the maintenance of organ systems. A recent study finds whether there is convincing biological or behavioral evidence linking vitamin D deficiency to brain dysfunction. Vitamin D has an important role in the development and function of the brain, according to researchers from Children’s Hospital Oakland Research Institute (CHORI). Joyce C. McCann, Ph.D., assistant staff scientist and Bruce N. Ames, Ph.D., senior scientist at CHORI concludes that there is sufficient biological evidence to suggest an important role of vitamin D in brain development and function.

A group of fat-soluble prohormones is Vitamin D. Lack of vitamin D causes rickets which is seen frequently in children in many developing countries. The dearth of Vitamin D is the core reason, but lack of calcium in the diet may also lead to rickets.

Vitamin D not only preserves bone health but is also involved in differentiation of tissues during development and in proper functioning of the immune system. It was discovered in recent studies that this vitamin plays a role in maintaining immune functions.

Vitamin D’s presence in brain functioning includes the circulation of vitamin D receptors throughout the brain; and this vitamin has the capacity of affecting the brain. It is involved in learning, memory, motor control, possibly even maternal and social behavior. These points were thoroughly discussed by McCann and Ames. Growing research shows that vitamin D is essential not just for strong bones but also for muscle strength, balance, brain function and preventing some cancers, says J. Edward Puzas, a researcher and URMC professor of orthopedics. The food sources for the vitamins are relatively limited. A few foods found rich in the vitamin include cold water fish and eggs in addition to fortified foods. Salmon, tuna especially the venerable cod liver oil, are excellent sources.

Vitamin D is produced naturally after the skin is exposed to the sunlight. The ultraviolet rays from the sun produces a hormone called calcitriol which is metabolized by a biochemical in the skin to Vitamin D. Such kind of vitamin D configuration by UV is much more efficient in light skin than dark skin. In regions like of Northern latitudes where sunlight is inadequate, would need the intake of Vitamin D whereas people in Australia or Arizona may possibly avoid sunburns and prevent themselves from skin cancer caused by the ultraviolet rays.