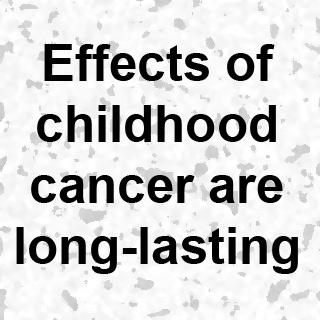 Many children seem to overcome cancer, but when they grow into adults they may require special attention throughout their lives. The study commenced by the National Cancer Institute in Bethesda revealed that adult survivors of childhood cancer experience poorer health, more medical illnesses, greater limitations in daily functioning and decreased productivity compared with adults who did not have cancer as children.

Improved and advanced medications have enabled doctors to help increase the chances of survival in a good amount of children with cancer, but that’s not the end. These children may continue developing ailments all their lives, threatening their very survival. The study carried out analyzed the data obtained from the National Health Interview Survey. This survey which was conducted at a personal level, across the United States and collected information every year on all health topics in general.

“Our study suggests that adult survivors of childhood cancer deserve special medical attention and may benefit from interventions to improve their health and productivity,” explained Emily Dowling, MHS, of the National Cancer Institute in Bethesda.

The investigators observed 410 adult survivors of childhood cancer and 294,641 individuals without cancer. They analyzed the responses about the health and functional abilities of these two groups together. The investigators then concluded that the adults who had a past of childhood cancer, displayed unfavorable health and lacked promising productivity as compared to adults without cancer.

When questioned about their health in general, 24.3 percent of the survivors claimed to have fair or poor health conditions whereas only 10.9 percent of the general population seemed to be deprived of good health. Approximately 12.9 percent survivors faced health limitations in various ways, while only 3.4 percent of the masses confessed the same. A total of 20.9 percent survivors were unable to work due to ailments and amongst the general population 6.3 percent seemed to face health impacts on their work. Among the survivors 30.9 percent were probably confined to a particular category of work because of health and 10.6 percent people responded the same.

The investigators then segregated the data achieved by the cancer survivors, and analyzed all the information since the diagnosis began. It then appeared that these survivors were facing poor health conditions every time, especially in the first four years following diagnosis. This may continue till 30 or more years after the diagnosis. The survivors lacked the ability to accomplish various tasks and may be unable to perform their duties efficiently.

A total of 46.1 percent survivors seemed to remain confined to a particular kind of job due to health problems. 39.8 percent survivors reported that they were limited to the amount or kind of work they could do due to health problems but only 10.6 percent of the general population said the same. In the past years the survivors missed an average of 69.3 days from work. These results clearly reflect that cancer survivors possible face greater implications.

Even if we see the present day clinical guidelines then they determine that cancer survivors receive health care that is based on their risk for additional health conditions. It is a major issue of worry, and there is an urgent requirement of introducing a treatment that may avoid any health implications on patients with cancer during childhood. This should probably result in overcoming cancer and also various health issues that these individuals undergo.

The study has been published online in Cancer, a journal of the American Cancer Society.