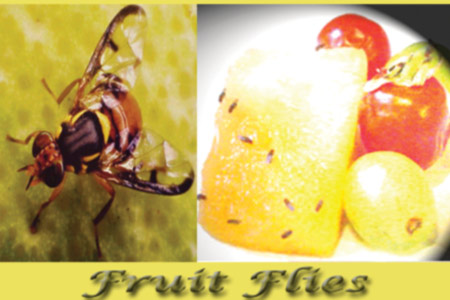 Fruit flies are known primarily for their hatching inside the over a ripe fruit and roam mostly in the sugar-rich environment. To avoid getting drowned into the earth they tend to leave the fruit and should rather burrow into the earth where the larvae can grow and hatch into flies that will take wing to lay their own eggs.

Researchers at the University of Georgia have found that the vital developmental change from food attraction to aversion in the fruit fly larva is powered and controlled by a timing mechanism in the brain and the sensory system. It has been revealed though the study that this avoidance mechanism has been taken on as an evolutionary process which could one day lead for a new way of controlling pain in humans and other animals.

Ping Shen, an assistant professor in the department of cellular biology at UGA and a member of the Biomedical & Health Sciences Institute said, “The findings provide an intriguing glimpse into how an animal modulates its chemosensory properties and behaviors in coordination with development.”

“Fruit fly larvae are like tadpoles—they have to migrate from their first habitat to stay alive and flourish,” said Shen. “What we found was that a molecular timing switch tells them when to quit eating and burrow into the earth. We also found that the same switch can trigger strong cooperative behavior in the flies.”

The other researchers in this study from the University of Georgia other than Shen are Andrew Sornborger of the Faculty of Engineering and the department of mathematics; Jie Xu, a doctoral student in Shen’s laboratory; and Jennifer Lee, a former undergraduate and technician, also in Shen’s lab.

Sornborger and his colleagues practiced a cutting-edge imaging method and the researchers also imagined the fruit fly (Drosophila melanogaster) with unprecedented sensitivity.

“Analysis techniques have lagged behind image acquisition technology,” said Sornborger. “This work addresses that gap. With our methods we have been able to image the inner workings of the nervous systems in real time amid massive amounts of data.”

As fruit flies can’t really survive in the rotting fruit as they are risking their life and get drowned in the ripening fluid, they are likely to get more exposure to harmful micro-organisms which can kill them. Thus they flee away the larvae “wander” out and get buried into the ground.

PAIN is a channel protein which responds to noxious stimuli like heat and horseradish. The transformation from eating to non-eating is controlled by a timing mechanism which switches on a fructose sensor which involves PAIN; this was one of the interesting finding by the researchers.

The authors Shen and Sornborger said that all this might seem to be extremely specialized as it involves fruit flies which are far from the case. The molecules which are working in this system have counterparts in mammalian models that can be implied in many psychological procedures and behaviors like the response to food and alcohol and the suppression of anxiety and pain.

Thus by understanding the structure or the system in the fly would develop as a new pain reliever which might involve lower risk of harm to the organisms involving the shutting down of pain at the prime level and such a thing would be a gift from a fly.

The research has been published on 11th May, 2008 in the journal Nature Neuroscience.