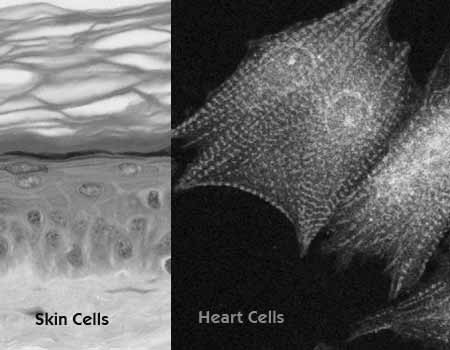 The University of California Los Angeles (UCLA) has made a surprising creation – functioning heart and blood cells from skin cells. The stem cell researchers at UCLA modified and reprogrammed skin cells taken from mice to make them similar to embryonic stem cells further developing them into cardiac cells.

It has been found that ‘induced pluripotent stem cells’ (iPS cells) are the stem cells that can be differentiated into three types of cardiovascular cells which have the function of repairing the vessels in the heart and blood. The iPS cells don’t involve embryos or eggs but resemble embryonic cells. Embryonic cells have the property of developing into all types of cells found in our body.

Dr. Robb MacLellan, a researcher at the Eli and Edythe Broad Center of Regenerative Medicine and Stem Cell Research and senior author of the study, said, “I believe iPS cells address many of the shortcomings of human embryonic stem cells and are the future of regenerative medicine.” Adding, “I’m hoping that these scientific findings are the first step towards one day developing new therapies that I can offer my patients. There are still many limitations with using iPS cells in clinical studies that we must overcome, but there are scientists in labs across the country working to address these issues right now.”

This finding will particularly benefit people suffering from atherosclerosis (condition in which walls and vessels of the heart thicken due to formation of plaque), or heart failure. New treatments targeting the cardiac cells can now be thought of and practiced according to MacLellan, associate professor of cardiology and physiology. One more highlight of this finding is that the differentiation of iPS into blood cells can help people with blood diseases and the iPS can be of immense help in bone marrow transplantations. However study is still underway to find whether the human iPS cells will behave in the similar manner as the cells from the mouse did. If this happens, then the above mentioned possibilities will soon become a reality and the patients will have a handy resource to repair and regenerate their own heart; which is their own skin.

“Our hope is that, based on this work in mice, we can show that similar cardiovascular progenitor cells can be found in human iPS cells and, using a similar strategy, that we can isolate the progenitor cells and differentiate them into the cells types found in the human heart,” MacLellan said.

The experiment done by the researchers consisted of modifying the skin cells taken from the mice to match embryonic stem cells. Although iPS has properties matching to that of the embryonic stem cells, further research needs to explore and confirm their potential of maturing into different types of cells. “Theoretically, iPS cells are able to differentiate into 220 different cells types,” said Dr. Miodrag Stojkovic, co-editor of Stem Cells. “For the first time, scientists from UCLA were able to induce the differentiation of mouse iPS cells into functional heart cells.” This has been the first step towards the confirmation of the potential of iPS.

In the experiment, the iPS cells were cultured into a protein matrix of embryonic stem cells after which they differentiated into immature heart cells (cardiovascular progenitor cells) which have the potential to mature into fully functioning heart cells like cardiomyoctyes, endothelial cells and vascular smooth cells. Cardiomyoctyes are the cells that control heart beat and after maturation can beat in a Petri dish. Endothelial cells are responsible for the formation of rudimentary blood vessels and vascular smooth muscles cells for the lining of the wall of blood vessels.

The two advantages of using iPS for treating patient’s heart is that first of all there will be no issue of rejection unlike heart transplant or blood transfusion as the iPS will be highly individualized coming directly from the patient. Secondly, it will restrict growth of tumors as specified cardiac cells will be created prohibiting tumor formation.