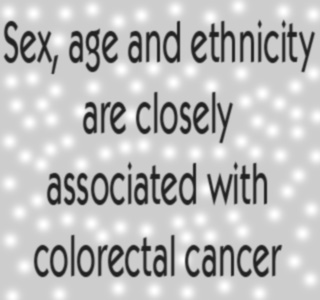 According to a study led by researchers at the University of Southern California (USC) and USC/Norris Comprehensive Cancer Center, the interaction of sex, age and ethnicity has a significant impact on the survival in metastatic colorectal cancer (MCRC) patients.

Andrew Hendifar, M.D., MPH, fellow in the division of hematology/oncology at the Keck School of Medicine of USC and lead author of the study says that age and ethnicity are entrenched factors which impact the survival in colorectal cancer.

Through the study, the researchers found that the pre-menopausal women with metastatic colorectal cancer between the ages of 18 to 44 years old survived more than younger men, while the older women of 75 years and above had primarily worst overall survival condition than older men.

The end results of the research would be presented at a poster discussion on June 1st at the 2008 annual meeting of the American Society of Clinical Oncology (ASCO) at McCormick Place in Chicago. And further more the study found the emerging fact of female hormones being protective for colon cancer, researchers say.

“This study provides further evidence that estrogen may play an important role not only in colon cancer development but also progression of the disease, and may impact how we develop therapies for women and men with colon cancer,” says Heinz-Josef Lenz, M.D., professor of medicine at the Keck School of Medicine and a senior investigator on the study.

The researchers examined 56,598 patients with metastatic colorectal cancer from the year 1988 to 2003, by using the Surveillance, Epidemiology and End Results (SEER) registry. Different models were designed using the patient’s age at diagnosis, sex, ethnicity and overall living style.

Irrespective of the age there was no survival difference found between men and women with MCRC. Although when the factor of age was included into the model, the importance of sex became significant linked with survival across all ethnicities.

“The data warrant further studies to determine the role of estrogen and ethnicity in colorectal cancer development,” he says. “In the future, we may tailor different treatments for men and women.”

The research even established that certain ethnicities had enhanced overall survival compared to others. Some of them to name are Hispanics and Asians that have improved results than Caucasians and African-Americans.

Hendifer suggests that some further studies are needed to look upon certain diets or particular surroundings which contribute to the development of colorectal cancer.