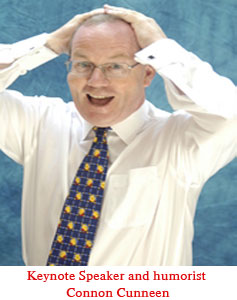 And the humorist is also a cancer survivor! Humorist Conor Cunneen is a dual cancer survivor and the statement is his keynote as he motivates and inspires people as he narrates his journey from being diagnosed in early 2007 to his recovery.

“There are a number of treatment options available ranging from radiation to prostatectomy, in other words the removal of the prostate,” said the speaker and Chicago-based Irishman. Since the cancer in him developed at a slow pace, he had considerable time to choose his option.

“I did a lot of research on the topic, spoke to a lot of people and ultimately opted for the prostatectomy. My information systems, i.e., my wife, advised I had to purchase new pajamas for the hospital, so that is why I entered Northwestern Memorial Hospital with pajamas bearing the Monty Python legend ‘It’s Just a Flesh Wound.’ I’ve been blessed with a great attitude and I believe every cloud does have a silver lining. As a result, I created a keynote of the same title. It is perfect for all conferences and events where an uplifting feel-good message is appropriate, which is basically everywhere.”

Talking about his first encounter with cancer, Conor said, “I had thyroid cancer some years ago when living back in Ireland. The whipped that out as well. I tell my audiences when I keynote that having had a prostatectomy and a thyroidectomy, I now have a unique Irish condition called ‘there’s not much left-o-me.” Cunneen has been often described as ‘James Joyce meets Tom Peters.’

According to the National Cancer Institute, this year as much as 186,000 men are estimated to be diagnosed with prostate cancer. Every year around 30,000 die from the disease.

Using this keynote, it is just another way of Chicago Toastmasters Humorous Speaker of the Year award winner to cheer up men who have developed the disease, helping them to fight it with a great attitude as the disease is not life-threatening. It’s time to think positive!