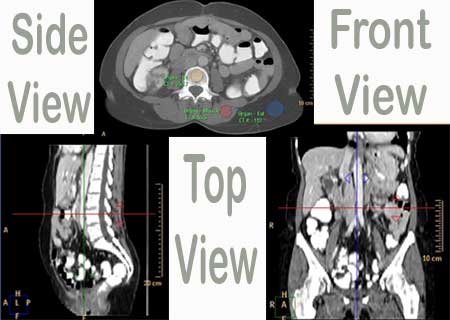 According to a latest study, the computed tomography colonography may be capable of screening for two diseases: colorectal cancer and osteoporosis, at once. Both of these diseases are believed to mostly affect 50+ adults.

A study was conducted at the San Francisco Veterans Administration Hospital. Here the results of around 35 patients aged from 54 to 79, who had undergone CT colonography and bone mineral density testing, were assessed. Apparently, out of the 35 studied patients, 30 were male, while the rest were female.

Lead author, Rizwan Aslam, M.B.Ch.B., assistant clinical professor of radiology, University of California, San Francisco, says that, “With CT colonography, in addition to screening for colorectal cancer, we were able to identify patients with osteoporosis.”

It’s stated that CT colonography is apparently first initiated with an abdominal CT scan. This scan includes cross-sectional images of all the structures in the abdomen, inclusive of the spine. Apparently, computer software arranges the CT images in such a way in order to produce a “fly-through” view of the colon.

With the help of the similar CT images, another software application can supposedly create three-dimensional images of the spine, in turn permitting the measurement of the bone mineral density. Evidently, low bone mineral density is linked with osteoporosis, a disease where the bones get brittle and very vulnerable to breakage.

Dr. Aslam says that, “The bone density measurements obtained from CT colonography were comparable to the DEXA results. Both tests identified osteoporotic bones.”

Dr. Aslam further says that CT colonography is apparently not a substitute for DEXA testing. However supposedly it could be used to screen osteoporosis in more and more people. Also that, CT colonography along with bone density testing apparently reduces the patient’s exposure to radiation and is also more economical.

Often physicians suggest adults to undergo traditional colonoscopy or CT colonography every seven to ten years, beginning at the age of 50. An early detection of osteoporosis may lead to early intervention and treatment.

Their findings will be presented today at the annual meeting of the Radiological Society of North America (RSNA).