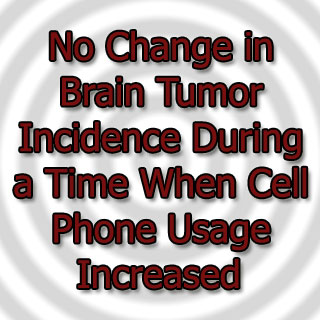 Over the years health experts have apparently associated cell phone use with a number of health risks. From supposedly disrupting sleep to lowering the sperm quality and the most recent effects of texting, mobile phones were claimed to have their flipsides. However a novel brief communication shares that among adults nearly 5 to 10 years post the sharp increase in cell phone use, there was no substantial change in brain tumor incidence.

The researchers reveal that even during a period when cell phone usage had drastically surged there was no alteration in brain tumor incidence. Though cell phone use has been suggested as a possible risk factor for brain tumors, apparently no biological mechanism that elucidates this link is known.

As part of the analysis, annual incidence rates of glioma and meningioma among adults aged 20–79 years from Denmark, Finland, Norway, and Sweden was examined by Isabelle Deltour, Ph.D., of the Institute of Cancer Epidemiology, Danish Cancer Society, in Copenhagen, and colleagues. The researchers reported about 60,000 patients who were identified with these types of brain tumors between 1974 and 2003.

Prior to the introduction of cell phones, incidence rates over this 30 year-period were found to be constant, lowered or continued to augment gradually. They also observed no particular changes in incidence trends in occurrence of brain tumors from 1998 to 2003. The authors suggest that various reasons may possibly contribute to this finding.

“Because of the high prevalence of mobile phone exposure in this population and worldwide, longer follow-up of time trends in brain tumor incidence rates are warranted,” the authors write.

During this time cell phone usage was not assessed at the individual level. Only brain tumor incidence was taken into account.

The communication has been published online in the Journal of the National Cancer Institute.