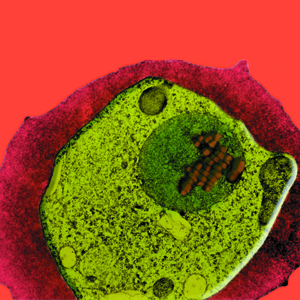 Malaria is said to be caused by a parasite known as Plasmodium, which is spread by means of the bites of infected mosquitoes. In the human body, the parasites reproduce in the liver, and then contaminate the red blood cells. Researchers from Washington University School of Medicine in St. Louis have recognized a protein developed by the malaria parasite that may be vital in its capability to surmount over human red blood cells.

Apparently, malaria is said to be the cause of death of around 1 million to 3 million people yearly in third world countries. Death seems to arise from impairment to red blood cells and jamming of the capillaries that apparently feed the brain and other organs.

“The malaria parasite seizes control of and remodels the red blood cell by secreting hundreds of proteins once it’s inside. But without this protein, plasmepsin V, those other proteins can’t get out of the parasite into the blood cell, and the infectious process stops,” commented, Dan Goldberg, M.D., Ph.D., professor of medicine and of molecular microbiology and a Howard Hughes Medical Institute Investigator.

The nearest equivalent to plasmepsin V in humans is a protein known as beta secretase, but supposedly it’s only vaguely linked. The noteworthy disparities between the malarial protein and its closest human relation could denote that researchers may utilize the drugs to immobilize plasmepsin V with not much apprehension of unfavorable side effects on human biology.

Goldberg had examined plasmepsin V formerly and identified it to be a malarial protease, or an enzyme that appears to cut other proteins. When a different lab exhibited that proteins significant to the infectious process could be clipped in a part of the parasite where Goldberg recognized that plasmepsin V was active, he and his colleagues pondered whether it was performing the clipping.

Supposedly, the proteins discharged by the malaria parasite appear to have a general segment or label that plasmepsin V identifies and acts on, clipping off part of the protein. Goldberg is of the opinion that when the ticket is detached, the remnants of the protein are apparently attached to another protein that performs as a chaperone, thereby transmitting the proteins to a channel in the malaria parasite’s outer membrane. The channel is said to enable the protein to leave the parasite and penetrate the red blood cell.

In the test tube, parasites in which plasmepsin V had apparently been halted, could not release the infectious proteins that appear to facilitate them to hijack red blood cells.

Goldberg remarked, “This is the key enzyme that determines whether proteins get out to remodel the red blood cell or not, so it’s a very attractive target for therapy. Another reason it’s a good potential drug therapy target is that it doesn’t vary much in different strains of malaria.”

Goldberg and his colleagues are carrying on experiments to find out the function of plasmepsin V.