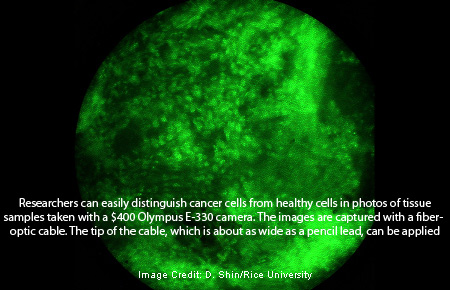 Previously we have mentioned several articles elaborating the harm cancer causes both physically and emotionally. more recently, its early detection probably enabling quick recovery has been in the spotlight. Biomedical engineers and researchers from the Rice University and the University Of Texas M.D. Anderson Cancer Center have invented a low-cost device which with the help of a digital camera may help doctors differentiate between cancer cells and healthy cells. This can be simply done by viewing the LCD monitor placed on the back of the camera.

With the help of a tiny bundle of fiber-optic cables connected to a consumer-grade camera experts captured images of cells. As they were viewing the cells they added a fluorescent dye. This caused the nuclei present in the samples to glow brightly when lighted with the tip of the fiber-optic bundle. They tested three tissue types particularly cancer cell cultures that were grown in a lab, tissue samples from newly resected tumors and healthy tissue viewed in the mouths of patients.

Rebecca Richards-Kortum, the study’s lead author and Rice’s Stanley C. Moore Professor of Bioengineering, professor of electrical and computer engineering and the founder of Rice’s global health initiative, Rice 360 elucidates, “Consumer-grade cameras can serve as powerful platforms for diagnostic imaging. Based on portability, performance and cost, you could make a case for using them both to lower health care costs in developed countries and to provide services that simply aren’t available in resource-poor countries”.

Experts reveal that the abnormal cells were easily identified on the LCD screen as the nuclei of cancerous and precancerous cells are remarkably distorted compared to the healthy cells. In order to permit medical professionals who are not pathologists to use the device, experts could introduce software that would make it easy for them to identify cancer cells easily. Further this device may be used for regular cancer screening and to assist oncologists note how patients were responding to the treatment.

Study co-author Mark Pierce, Rice faculty fellow in bioengineering reveals, “The dyes and visual techniques that we used are the same sort that pathologists have used for many years to distinguish healthy cells from cancerous cells in biopsied tissue. But the tip of the imaging cable is small and rests lightly against the inside the cheek, so the procedure is considerably less painful than a biopsy and the results are available in seconds instead of days.”

Experts share that such a portable, battery-powered device may be used specifically for global health. This could be a blessing in countries where conventional diagnostic technologies are way to expensive.

These findings were published online this week in the open-access journal PLoS ONE.