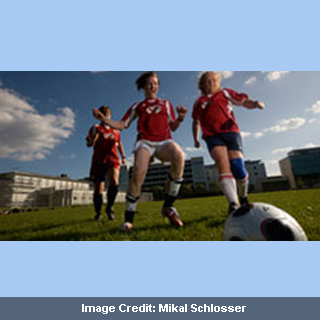 Soccer is a pleasurable team sport that provides an all-round fitness and can be used as a treatment for lifestyle-related diseases. Men worry less when playing soccer than while running. Women’s soccer creates we-stories and helps them stay active.

The statements quoted above are the results yielded by an elaborate soccer research project conducted by the Department of Exercise and Sports Sciences, University of Copenhagen. The research which stretched over three years, involved more than 50 researchers across 70 countries. The team focused on the physiological, psychological and sociological aspects of the game in comparison with running. The research comprised of several studies on men, women and children who were divided into soccer, running and control groups.

The scientists focused on the physical effects of soccer training on untrained subjects in the age group between nine to seventy-seven. The results garnered were pretty straightforward and conveyed that soccer provides for better health and fitness as compared to running.

Senior scientist Peter Krustrup explains that, “Soccer is a very popular team sport that contains positive motivational and social factors that may facilitate compliance and contribute to the maintenance of a physically active lifestyle. The studies presented have demonstrated that soccer training for two-three hours per week causes significant cardiovascular, metabolic and musculoskeletal adaptations, independent on gender, age or lack of experience with soccer.”

Prof. Jens Bangsbo adds that the health effects of soccer can be maintained for a long period even if the training frequency is altered. He goes on to say that, “Recreational soccer, therefore, appears to be an effective type of training leading to performance improvements and significant beneficial effects to health, including a reduction in the risk of cardiovascular diseases, falls and fractures. In a number of aspects, soccer training appears to be superior to running training. Soccer training can also be used to treat hypertension and it was clearly superior to a standard treatment strategy of physician-guided traditional recommendations”.

Scientists are of the opinion that soccer can be used to promote health-related activities. They are now focusing on understanding how soccer can be utilized to improve heart-health of children. They are also trying to learn how soccer may prove beneficial to those suffering from type II diabetes. Apart from this, the research also zeroed down to the benefits soccer and running may provide to women.

Both soccer and runner groups trained distinctly, and there were major differences in the way they interacted and the way they looked at their sport. The runners cared more about themselves as individuals, whereas the soccer group looked after each other as a team. The initial stages of the research showed that women thought of running as an easier form of exercise until the intervention program was over. However, results indicated otherwise.

Associate Professor Laila Ottesen, remarked on the findings by saying that, “The most important finding was the difference in social interaction and creation of we-stories between the groups, which may impact the possibilities of long-term compliance. A year after the study, many of the soccer players continue to play soccer, some have even joined an organized soccer club. Not many from the running group have continued their training. This can very well be due to the fact that the runners focused on their health and on getting in shape, whereas the soccer players were more committed to the activity itself, including the fun and not letting down team mates.”

Another research investigated the exertion experienced during the training period especially by untrained participants. The research which was conducted on 6 groups of untrained men and women showed that all groups experienced high levels of flow during intervention. This point indicates that the participants were motivated, happy and totally involved until they felt exhausted and lost track of time. Women showed no anxiety while playing soccer, however the men in the running group seemed to be more worried than their soccer group allies.

Associate Professor Anne-Marie Elbe mentioned that the men who played soccer elicited lower levels of worry than during running, 2.8 vs 4.0 on a 0-6 scale, and although they are training at the same average heart rate they do not feel the exertion as strongly as during running. Further research is needed to examine why men and women experience playing soccer differently but it could be that the men just have had more experience with football in earlier years than the women.

The results of the research have been appreciated very well and are being published by the Scnadinavian Journal of Medicine and Science in Sports, in a special edition issue titled, ‘Football for Health’.