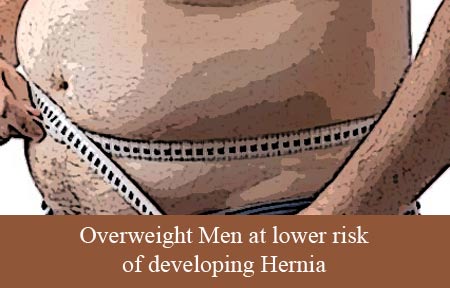 Yes that’s right! This may sound tempting to add on that extra pound to your waist but a long term study found that overweight men tend to have lower risk of Hernia. Hernia which makes an internal organ bulge out due to a weak area of a muscle, may not trouble the masses who fall in to the obese sections of the society.

The findings which were published in Annals of Surgery, researchers found that around 7,500 Swedish men who were followed for 34 years, the risk of developing a groin hernia declined as the men’s weight climbed up the weighing scales. It was found that middle-aged men who were obese were 43 percent less prone to develop Hernia over the next three decades as compared to men who had a normal weight.

However tempting this news may sound, but imagine bulging flab out of your body instead of bulging organs, both of the sights are equally unpleasant to look at. Hernia may be caused due to additional pressure on the abdominal wall, for instance; heavy weight lifting or increase of pressure in the compartment of the residing organ.

The Research was led by Dr. Anders Rosemar and he and his fellow researchers at Sahlgrenska University Hospital/Ostra in Sweden were unclear as to how additional weight on to the body protects one from hernia. One of the reasons that could protect from hernias could be the extra fat and thickness of the abdominal wall which prevent from hernias being formed.

Also one more reason which is being speculated is, due to the additional fat in obese men, it is tough to detect the hernia protrusions as compared to the thinner and fitter ones. However enticing it may sound, but it is always advisable for obese men to shave off their flab and waistline tyres as obesity also invites risks such as diabetes, cardiovascular issues, fertility anomalies, arthrosis of backbone and so on.