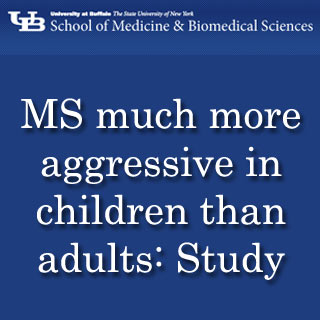 Magnetic resonance images (MRI) of patients diagnosed with multiple sclerosis in childhood demonstrate that pediatric start of multiple sclerosis seems to be more aggressive and causes added brain lesions as compared to MS diagnosed in adulthood. This novel finding was discovered by scientists at the University of Buffalo.

According to The National Multiple Sclerosis Society, nearly 8,000 to 10,000 children which are defined as up to 18 years old in the U.S. have multiple sclerosis. Also, an added 10,000 to 15,000 appear to have suffered from at least one symptom indicative of MS.

The disease is known to cause demyelination. Apparently, demyelination refers to the destruction of the sheath that protects and insulates nerve fibers. More so, it breaks in the myelin sheath and disturbs the flow of electrical impulses thereby causing loss of sensation and coordination.

“Patients with pediatric-onset MS have three times as many relapses annually than patients with adult-onset disease, which suggests there is greater disease activity in this population,” says corresponding author, Bianca Weinstock-Guttman, MD, associate professor of neurology in the UB School of Medicine and Biomedical Sciences.

She continued saying that, “But surprisingly, the average time to reach the secondary progressive phase of the disease is longer in patients who develop MS in childhood than in adult onset MS. Reaching the next stage of disability is almost 10 years longer in pediatric-onset patients.”

During the study, all participants were noted to have undergone a brain MRI scan at facilities at Buffalo General Hospital (BGH) and at Women and Children’s Hospital. Whereas the specific MRI metric analysis appear to have been performed at the Buffalo Neuroimaging Analysis Center (BNAC), part of the UB Department of Neurology/Jacobs Neurological Institute, located in BGH.

First author of the study and UB assistant professor of neurology and co-director in the Pediatric Multiple Sclerosis Center Eluen A. Yeh MD., said that both of these measures could possibly signify that MS is more aggressive in children in the early stages.

Yeh further said that, “This corresponds with recent data that suggest a higher lesion burden in pediatric MS than adult-onset MS. These findings are somewhat surprising, considering we have assumed that children generally have a greater capacity for central nervous tissue repair.”

The findings of this study seem to be limited to a cross-sectional study design. However, the findings suggest that children have a fairly better reserve and functional adaptability as compared to adults but less support for an improved remyelination process. Nonetheless, the remyelination process may perhaps require a more in-depth prospective analysis. Moreover, the data seems to support the need for early diagnosis and therapeutic intervention in pediatric MS patients.

The findings of the study have been published in the journal, Brain.