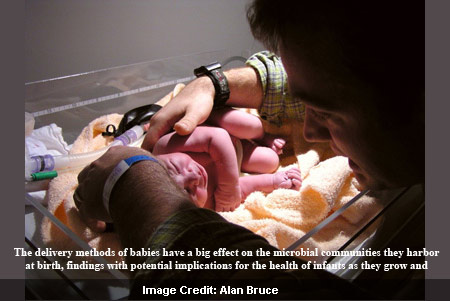 New findings reveal an important baseline for identifying the progression of bacterial communities on babies and their related effects on human health according to co-lead study author Maria Dominguez-Bello of the University of Puerto Rico. Experts share that the bacterial communities of C-section babies were subject by species from the staphylococcus genus. Most of these are harmless but very few of them cause severe infections. These differences may be associated with greater health risks in C-section babies, however they feel that further analysis is required.

Prior investigations revealed that babies born through C-section may be more inclined to specific pathogens, allergies and asthma as compared to those born vaginally. Findings may help elaborate greater chances of methicillin-resistant Staphylococcus aureus, or MRSA, in C-section babies. These are generally difficult to treat and they have been increasing in hospitals and clinics in recent years. Former CU-Boulder researcher Elizabeth Costello, now at Stanford University, was co-lead author on the study and co-authors included CU-Boulder Assistant Professor Noah Fierer, CU-Boulder Assistant Professor Rob Knight, Monica Contreras of the Venezuelan Institute for Scientific Research and Magda Magris of the Amazonic Center for Research and Control of Tropical Diseases in Venezuela.

A study conducted in 2004 revealed that approximately 64 percent to 82 percent cases of MRSA skin infections in newborns developed in C-section infants. The WHO suggests that the percentage of births through C-section should not cross 15 percent in any country this is mainly because of greater medical complications. These complications in China are nearly 50 percent and the United States they are about 30 percent.

Human microbial communities are known to play a significant role in digestion and immune health. They are assumed to jointly provide us with important traits we depend on for such functions. One possibility is direct transfer of a mother’s vaginal bacteria onto newborns may act as a shield against diseases by controlling the colonization of other harmful pathogens.

In another study led by Knight, experts formed the first atlas of microbial diversity across the human body among adults. They included large variations in microbe populations from the forehead and feet to noses and navels of individuals; these differences were not evident in the PNAS newborn study. The aim of the human bacterial studies is to observe what is normal for healthy people as it would provide a guideline for studies analyzing human disease states.

Knight of CU-Boulder’s chemistry and biochemistry department reveals, “The prospects of learning how differences in individual human microbial communities can be used as a diagnostic tool in biomedicine is frankly quite exciting. With these new data on babies, we now have a second point in time for comparison”.

This study included nine women aged between 21 and 33 years and 10 newborns. It was conducted at the Puerto Ayacucho Hospital in Amazonas State, Venezuela. Within 24 hours experts sampled the babies by swabbing their mouths and skin, they also collected samples from their upper throats and gastrointestinal tract. They further used a powerful gene sequencing technique to concurrently examine all the bacteria.

Fierer of CU-Boulder’s ecology and evolutionary biology department and also a fellow at CU’s Cooperative Institute for Research in Environmental Sciences elucidates, “In a sense, the skin of newborn infants is like freshly tilled soil that is awaiting seeds for planting in this case bacterial communities. The microbial communities that cluster on newborns essentially act as their first inoculation.”

She further shares, “it appears that the newborns pick up the bacteria from the mothers on the way out. But in C-sections, the bacterial communities of infants could come from the first person to handle the baby, perhaps the father.”

Experts reveal that this analysis enabled them to capture the first moments of infant bacterial communities. They further say that the challenge now is to complete the entire story by noticing microbial communities among infants, toddlers, children and adults over weeks, months and years in order to observe how they develop and modify.

Knight quotes, “While the cost of gene sequencing is dropping rapidly, new techniques are allowing us to speed up the process at the same time. We can now foresee a time when such genetic sequencing could be used in relatively small biomedical laboratories in developing countries”.

The team’s attempts included separating and amplifying tiny bits of microbial DNA, then forming corresponding DNA strands with a high-powered sequencing machine that permitted them to include hundreds of samples together in a single sequencing runs. This was done to observe diverse families and genera of bacteria.

This study appears in the June 21, 2010 issue of the Proceedings of the National Academy of Sciences.